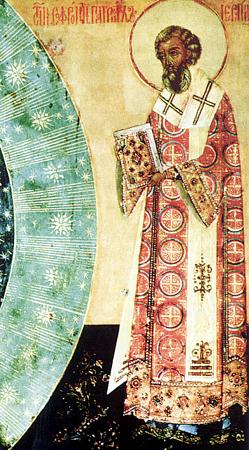 Isaiah 25:1-9
O Lord, You are my God. I will exalt You, I will praise Your name, For You have done wonderful things; Your counsels of old are faithfulness and truth. For You have made a city a ruin, A fortified city a ruin, A palace of foreigners to be a city no more; It will never be rebuilt. Therefore the strong people will glorify You; The city of the terrible nations will fear You. For You have been a strength to the poor, A strength to the needy in his distress, A refuge from the storm, A shade from the heat; For the blast of the terrible ones is as a storm against the wall. You will reduce the noise of aliens, As heat in a dry place; As heat in the shadow of a cloud, The song of the terrible ones will be diminished. And in this mountain The Lord of hosts will make for all people A feast of choice pieces, A feast of wines on the lees, Of fat things full of marrow, Of well-refined wines on the lees. And He will destroy on this mountain The surface of the covering cast over all people, And the veil that is spread over all nations. He will swallow up death forever, And the Lord God will wipe away tears from all faces; The rebuke of His people He will take away from all the earth; For the Lord has spoken. And it will be said in that day: Behold, this is our God; We have waited for Him, and He will save us. This is the Lord; We have waited for Him; We will be glad and rejoice in His salvation.

Proverbs 12:8-22
A man will be commended according to his wisdom, But he who is of a perverse heart will be despised. Better is the one who is slighted but has a servant, Than he who honors himself but lacks bread. A righteous man regards the life of his animal, But the tender mercies of the wicked are cruel. He who tills his land will be satisfied with bread, But he who follows frivolity is devoid of understanding. The wicked covet the catch of evil men, But the root of the righteous yields fruit. The wicked is ensnared by the transgression of his lips, But the righteous will come through trouble. A man will be satisfied with good by the fruit of his mouth, And the recompense of a mans hands will be rendered to him. The way of a fool is right in his own eyes, But he who heeds counsel is wise. A fools wrath is known at once, But a prudent man covers shame. He who speaks truth declares righteousness, But a false witness, deceit. There is one who speaks like the piercings of a sword, But the tongue of the wise promotes health. The truthful lip shall be established forever, But a lying tongue is but for a moment. Deceit is in the heart of those who devise evil, But counselors of peace have joy. No grave trouble will overtake the righteous, But the wicked shall be filled with evil. Lying lips are an abomination to the Lord, But those who deal truthfully are His delight.

Sainted Sophronios, Patriarch of Jerusalem, was born in Damascus. From his youthful years he distinguished himself by his piety and his love for the classical sciences. He advanced especially in philosophy, for which they were wont to call him the Wise. But the future hierarch sought out an higher wisdom in the monasteries, and in conversations with the wilderness-dwellers. He arrived in Jerusalem at the monastery of Saint Theodosios, and there he became close with the PriestMonk John Moskhos, becoming his spiritual son and devoting himself to him in obedience. They journeyed together through the monasteries, and they wrote down descriptions of the lives and precepts of the ascetics found there. From these jottings was afterwards compiled their reknown book, the “Leimonarion” or “Spiritual Meadow”, which was highly esteemed at the Seventh OEcumenical Council.       To save themselves from the devastating incursions of the Persians, Saints John and Sophronios quit Palestine and withdrew to Antioch, and from there they went to Egypt. In Egypt Saint Sophronios became seriously ill. During this time he also decided to become a monk and so he accepted tonsure from the Monk John Moskhos. After the return to health of Saint Sophronios, they both decided to remain in Alexandria. There they were fondly received by the holy Patriarch John the Merciful (Comm. 12 November), to whom they rendered great aid in the struggle against the Monophysite heresy. At Alexandria Saint Sophronios’ eyesight was afflicted, and he recoursed with prayer and faith to the holy UnMercenaries Cyrus and John (Comm. 31 January), and he received healing in a church named for them. In gratitude, Saint Sophronios then wrote the Vita of these holy unmercenaries.       When the barbarians began to threaten Alexandria, the holy Patriarch John, accompanied by Saints Sophronios and John Moskhos, set out for Constantinople, but along the way he died. Saints John Moskhos and Sophronios with eighteen other monks then set out for Rome. At Rome the Monk John Moskhos also died (+ 622). His body was conveyed by Saint Sophronios to Jerusalem and buried at the monastery of Saint Theodosios.       In the year 628 the Jerusalem patriarch Zacharias (609-633) returned from the Persian Captivity. After his death, the patriarchal throne was occupied for a space of two years by Saint Modestos (633-634, Comm. 18 December). After the death of Saint Modestos, Saint Sophronios was chosen patriarch. Sainted Sophronios toiled much for the welfare of the Jerusalem Church as its primate (634-644).       Towards the end of his life, Saint Sophronios with his flock lived through a two year siege of Jerusalem by the Mahometans. Worn down by hunger, the Christians finally consented to open the city gates, on the condition that the enemy spare the holy places. But this condition was not fulfilled, and holy Patriarch Sophronios died in deep grief over the desecration of the Christian holy places.       Written works by Patriarch Sophronios have come down to us in the area of dogmatics, and likewise his “Excursus on the Liturgy”, the Vita of the Nun Mary of Egypt (Comm. 1 April), and also about 950 tropars and stikhi-verses from Pascha to the Ascension. While still a priestmonk, Saint Sophronios made review and corrections to the “ustav-rule” of the monastery of the Monk Sava the Sanctified (Comm. 5 December). And the “tri-odic song” of the saint for the Holy Forty Day Great Lent is included in the composition of the contemporary Lenten Triodion.

The Monk Sophronii the Hermit, of Pechersk, asceticised in the Farther Caves (the Theodosiev Caves), during the XIII Century. The holy ascetic wore an hairshirt and an heavy iron belt. The monk daily read through the whole Psalter.

Hieromartyr Pionius of Smyrna and those with him: Asclepiades, Macedonia, Linus and Sabina (250).

The PriestMartyrs Pionos and Linos  Smyrna Presbyters, the Holy Martyresses Sabina and Macedonia, and the Holy Martyr Asclepiades suffered during the time of persecution under the reign of Decius (249-251). They suffered at Smyrna, a mercantile city reknown in antiquity, situated on the Eastern shores of the Aegean Sea. The Smyrna Church was founded by the holy Apostle John the Theologian  (Comm. 8 May and 26 September), and it was glorified by the stoic firmness of its confessors in the faith of Christ.       Having learned that a persecution had begun, and preparing themselves for suffering, Saint Pionos together with Sabina and Asclepiades dwelt in strict fasting and intense prayer. Saint Pionos took three lengths of chain and placed them on himself and his companions.       The holy martyrs were arrested on 23 February  the day of memory of the holy PriestMartyr Polycarp, Bishop of Smyrna (+ 167)  a feastday for the Smyrna Christians. After a brief interrogation the holy confessors were led off to prison. And in prison Saint Pionos with his companions met up with the presbyter of the Smyrna cathedral church, named Linos, together with his wife named Macedonia from the village of Carina. They had likewise been imprisoned for confessing the Name of the Lord. Many believers visited the holy confessors in prison, offering them whatever they could, but the saints distributed it all to the prison guards. There came to Saint Pionos also those, who formerly were Christians, but out of fear of the torturers had consented to offer sacrifice to the idols: these too besought their prayers. Saint Pionos bitterly wept over the faint of heart and he admonished them: “Despair not, brethren, though ye have done a grievous sin, but repent ye truly and turn with all your heart to Christ”. After many torments, on 11 March 250 they crucified the holy martyr on a cross. They set kindling around the cross and set it afire. When the bon-fire subsided, everyone saw the body of the saint perfectly unharmed; even the hairs of his head were unburnt. His face was radiant, and it shone with a Divine grace.

Translation of the relics of Martyr Epimachus of Pelusium to Constantinople (250).

The Transfer of the Relics of the Martyr Epimakhos to Constantinople: the account about the saint is located under 31 October.

O Sophronius of Jerusalem, most wise among patriarchs, who struggled with
divine zeal,/ spread the commandments of truth with thy lips, set the
founda­tions of the Church in good order,/ and there transmitted them to those
in the monastic ranks:/ thou didst bring most wise discourses to light; and,
instructed thereby, we cry out to thee:// Rejoice, O splendid boast of the
Orthodox!