Matthew 11:27-30 (Matins Gospel)
All things have been delivered to Me by My Father, and no one knows the Son except the Father. Nor does anyone know the Father except the Son, and the one to whom the Son wills to reveal Him. Come to Me, all you who labor and are heavy laden, and I will give you rest. Take My yoke upon you and learn from Me, for I am gentle and lowly in heart, and you will find rest for your souls. For My yoke is easy and My burden is light.

Hebrews 13:17-21 (Venerable Anthony)
Obey those who rule over you, and be submissive, for they watch out for your souls, as those who must give account. Let them do so with joy and not with grief, for that would be unprofitable for you. Pray for us; for we are confident that we have a good conscience, in all things desiring to live honorably. But I especially urge you to do this, that I may be restored to you the sooner. Now may the God of peace who brought up our Lord Jesus from the dead, that great Shepherd of the sheep, through the blood of the everlasting covenant, make you complete in every good work to do His will, working in you what is well pleasing in His sight, through Jesus Christ, to whom be glory forever and ever. Amen.

Luke 6:17-23 (Venerable Anthony)
And He came down with them and stood on a level place with a crowd of His disciples and a great multitude of people from all Judea and Jerusalem, and from the seacoast of Tyre and Sidon, who came to hear Him and be healed of their diseases, as well as those who were tormented with unclean spirits. And they were healed. And the whole multitude sought to touch Him, for power went out from Him and healed them all. Then He lifted up His eyes toward His disciples, and said: Blessed are you poor, For yours is the kingdom of God. Blessed are you who hunger now, For you shall be filled. Blessed are you who weep now, For you shall laugh. Blessed are you when men hate you, And when they exclude you, And revile you, and cast out your name as evil, For the Son of Man’s sake. Rejoice in that day and leap for joy! For indeed your reward is great in heaven, For in like manner their fathers did to the prophets. 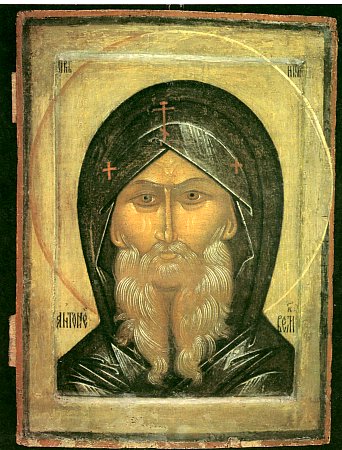 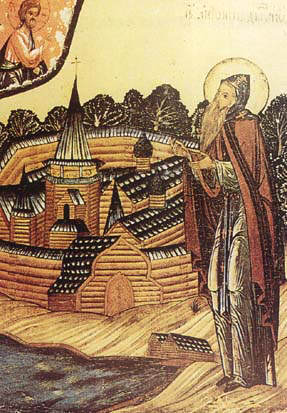 The Monk Antonii (Anthony) of Dymsk was born at Novgorod in about the year 1157. Upon a time once hearkening in church to the words of Christ: “Whoso wouldst to follow Me, let them deny themself and take up their cross and come follow Me” (Mt. 16: 24), the saint resolved to leave the world and take monastic vows under Saint Varlaam of Khutynsk (Comm. 6 November) at his monastery. When he was dying, the Monk Varlaam established Saint Antonii as monastery head in his place; but Antonii, shunning glory, left the monastery and settled at the shores of Lake Dyma, in the outskirts of the city of Tikhvin. Here he founded a monastery and asceticised at it until the end of his own life. According to tradition, the Monk Antonii made a journey to Constantinople and through the holy places. The Monk Antonii died in the year 1224 on 24 June (on this day is made his memory). In the year 1330 his relics were uncovered undecayed, and from that time they were glorified by many miracles. 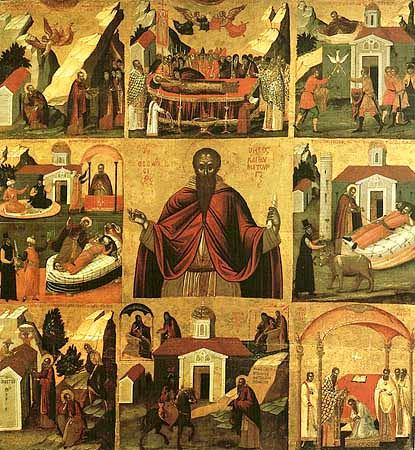 The Holy Emperor Theodosius the Great during the period of his reign (379u2011395) delivered a decisive blow to paganism: he issued a legal edict, under which any sort of service to the pagan gods was considered a transgression. The zealous proponent of Orthodoxy issued many laws in defense of the Church and against heretics. The Second OEcumenical Council (381) was convened by him.

Venerable Anthony the Roman, of Novgorod (1147).

The Monk Anthony the Roman was born at Rome in the year 1067 of rich parents, keeping to the Orthodox confession of faith, and he was raised by them in piety. As an orphan having lost his parents at age 17, he took up the study of the fathers in the Greek language. Afterwards he distributed part of his inheritance to the poor, and the other portion he put into a wooden box and threw it into the sea. And then he took monastic vows at one of the wilderness skete-monasteries, where he lived for 20 years. A persecution of the Latins against the Orthodox forced the brethren to separate. The Monk Anthony wandered about, going from place to place, until he came upon a large rock upon the solitary shore of the sea, where he lived for a whole year in fasting and prayer. A terrible storm, happening on 5 September 1105, tore away the stone on which the Monk Anthony was situated, and threw him into the sea. On the Feast of the Nativity of the MostHoly Mother of God the stone halted 3 versts from Novgorod on the banks of the River Volkhov near the village of Volkhovsk. This event is testified to in the Novgorod Chronicles. At this place the monk, with the blessing of Sainted Nikita the Hermit (+ 1109, Comm. 14 May), founded a monastery in honour of the Nativity of the MostHoly Mother of God. In another year fishermen fished out the box with the inheritance of the Monk Anthony, cast into the sea many years before. Having declared what was in the box, the monk took the box and bought land for the monastery. Spiritual asceticism was combined at the monastery with intense physical work. The Monk Anthony was concerned, that from the monastery income help should be rendered for the needy, and for orphans and widows. In the year 1117 the monk began construction with stone at the monastery. Up until our own day there has been preserved a cathedral in honour of the Nativity of the MostHoly Mother of God , built during the lifetime of the monk in the years 1117-1119 by the reknown Novgorod architect Peter, and with wall-frescoes in the year 1125. In the year 1131 Sainted Niphont of Novgorod made the Monk Anthony hegumen of the monastery. He died on 3 August 1147 and was buried by Sainted Niphont. The Monk Anthony was glorified in the year 1597. His memory is noted likewise (in honour of the uncovering of the relics) on the first Friday after the feastday of the First-Ranked Apostles Peter and Paul (29 June), and on 17 January , on the same nameu2011day when the memory of the Monk Anthony the Great is celebrated. The first life of the Monk Anthony the Roman was written soon after his death by his student and successor as hegumen , the priestmonk Andrei. A collected life, with an account about the uncovering of the relics and praiseworthy discourse, was done by a novice of the Antoniev monastery, the monk Niphont, in the year 1598.

Venerable Anthony of Krasny Kholm, monk (1481).
The Monk Antonii (Anthony) of Krasnokholmsk was initially a wilderness-dweller in the Belozersk (WhiteLake) lands. Having already the dignity of priestmonk, he arrived in the Tver’ land and settled near “Pretty Hillock” (“Krasnyi kholm”), at the bank of the River Mologa, building there a chapel and cell. After the discovery of an icon of Saint Nicholas, a stone church was built and a monastery founded, headed by the monk, who taught the brethren both by word and by example throughout his life. The Monk Antonii died in the year 1481.

St. Macarius Kalogeras, hierodeacon of Patmos (1737).
He was born to a prosperous family on the island of Patmos. As soon as he was old enough to leave home, he attended the Patriarchal School in Constantinople, where he distinguished himself. He became a monk, then a deacon, but always refused to be ordained to the priesthood, though the Metropolitan of Nikomedia wished Makarios to be his successor. Instead, he returned to Patmos in 1713 and entered the Monastery of St John the Theologian, where he remained until his death. Though he lived in great asceticism and constant prayer, Saint Makarios was moved by a concern for the salvation and education of the Orthodox people, who often lived in great ignorance, even of their own faith, under Ottoman rule. He established a school in a building adjacent to the monastery, and offered courses free of charge to any who could come. Modeling the curriculum on that of the Patriarchal School, he served more as a spiritual father than a worldly professor. The school grew steadily, partly due to generous contributions from a few wealthy Greek families and trade guilds in Constantinople. But students, many of them very poor, still had to pay for their own needs, and Saint Makarios used his own funds to aid the poorest of them. In addition, he secretly distributed any money that came to him personally to the poor on Patmos. The school at Patmos became famous throughout the Greek Church, and its head became a spiritual father not only to his students but througout the Greek nation. Bishops often asked him to write homilies; about sixty of these were published in book form as The Trumpet of the Gospel, which is still widely read today by the faithful. Having greatly edified thousands while laboring tirelessly for the salvation of his soul, Saint Makarios reposed in peace in 1737.

St. Anthony the Great, Troparion, Tone IV
Emulating the demeanor of the zealous Elijah, and following the Baptist with
forthright steps, O father Anthony, thou wast a dweller in the desert, and hast
made the whole world steadfast by thy supplications. Wherefore, entreat Christ
God, that our souls be saved.