The Saturday of the Dead. Tone five.
Today is fast-free!

1 Thessalonians 4:13-17 (Departed)
But I do not want you to be ignorant, brethren, concerning those who have fallen asleep, lest you sorrow as others who have no hope. For if we believe that Jesus died and rose again, even so God will bring with Him those who sleep in Jesus. For this we say to you by the word of the Lord, that we who are alive and remain until the coming of the Lord will by no means precede those who are asleep. For the Lord Himself will descend from heaven with a shout, with the voice of an archangel, and with the trumpet of God. And the dead in Christ will rise first. Then we who are alive and remain shall be caught up together with them in the clouds to meet the Lord in the air. And thus we shall always be with the Lord.

Luke 21:8-9, 25-27, 33-36
And He said: “Take heed that you not be deceived. For many will come in My name, saying, ‘I am He,’ and, ‘The time has drawn near.’ Therefore do not go after them. But when you hear of wars and commotions, do not be terrified; for these things must come to pass first, but the end will not come immediately. And there will be signs in the sun, in the moon, and in the stars; and on the earth distress of nations, with perplexity, the sea and the waves roaring; men’s hearts failing them from fear and the expectation of those things which are coming on the earth, for the powers of the heavens will be shaken. Then they will see the Son of Man coming in a cloud with power and great glory. Heaven and earth will pass away, but My words will by no means pass away. But take heed to yourselves, lest your hearts be weighed down with carousing, drunkenness, and cares of this life, and that Day come on you unexpectedly. For it will come as a snare on all those who dwell on the face of the whole earth. Watch therefore, and pray always that you may be counted worthy to escape all these things that will come to pass, and to stand before the Son of Man.

John 5:24-30 (Departed)
Most assuredly, I say to you, he who hears My word and believes in Him who sent Me has everlasting life, and shall not come into judgment, but has passed from death into life. Most assuredly, I say to you, the hour is coming, and now is, when the dead will hear the voice of the Son of God; and those who hear will live. For as the Father has life in Himself, so He has granted the Son to have life in Himself, and has given Him authority to execute judgment also, because He is the Son of Man. Do not marvel at this; for the hour is coming in which all who are in the graves will hear His voice and come forth-those who have done good, to the resurrection of life, and those who have done evil, to the resurrection of condemnation. I can of Myself do nothing. As I hear, I judge; and My judgment is righteous, because I do not seek My own will but the will of the Father who sent Me.

“Kozelshchanskaya” (1881) Icon of the Most Holy Theotokos. 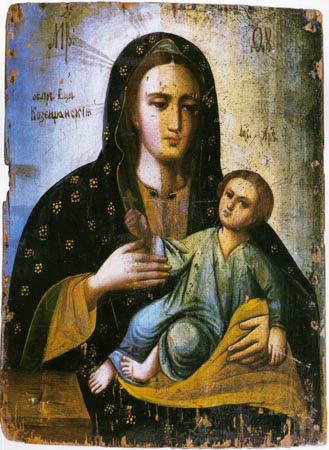 Venerable Timothy of Symbola in Bithynia (795).
The Monk Timothy the Wilderness-Dweller, an Italian by descent, from youth asceticised at a monastery, called “Symboleia”, in Asia Minor near Mount Olympos. The archimandrite of the monastery was the Monk Theoktistos. Saint Timothy was his disciple and co-student of the Monk Platon, a Studite Confessor (+ 814, Comm. 5 April). Attaining an high degree of spiritual perfection, he received from God the gift of healing the sick and casting out unclean spirits. The monk spent many years as an hermit, roaming the wilderness, the mountains and forests, both day and night offering up prayer to the Lord God. He died in extreme old age, in the year 795.

St. Eustathius (Eustace), archbishop of Antioch (337).
Sainted Eustathios, Archbishop of Antioch (323-331) was born in Pamphylian Sidon in the second half of the III Century. He was bishop of Beria (Beroea), and enjoyed the love and esteem of the people, and at the request of his flock he was elevated by the fathers of the First OEcumenical Council (325) to the Antioch cathedra-chair. Sainted Eustathios was profoundly learned as a theologian, and was likewise distinguished by his broad knowledge in the mundane sciences. When in the East there began spreading about the heresy of Arius, which denied the Consubstantiality of the Son of God together with the Father, Saint Eustathios struggled zealously , in both word of mouth and in writing , for the purity of the Orthodox faith. The First OEcumenical Council was convened in the year 325 by the holy Equal-to-the-Apostles Constantine the Great (306-337). The first to preside over this Council was Saint Eustathios. The Council condemned the heretical teachings of Arius and expounded the Orthodox confession into the Symbol of Faith (i.e. the Nicene Creed). But the mad Arius, as Saint Eustathios called him, who refused to renounce his errors, together with those of like mind with him, were deprived of dignity and excommunicated from the Church by the Council. Though among the bishops, who put their signature to the Nicene Symbol of Faith, were also those sympathising with the heresy of Arius yet signing the Acts of the Council not through conviction, but through fear of excommunication. After the Council, intrigues started against Saint Eustathios. With great cunning they gained his consent for the convening at Antioch of a Local Council. Having bribed a certain profligate woman, they persuaded her to appear at the Council with an infant at her breast, and falsely declare that the father of the infant was Saint Eustathios. Violating the Apostolic Rule concerning this, that accusations against clergy-servers need to be vouched to by two witnesses, the Arians declared Saint Eustathios deposed. Without a trial he was sent off into exile to Thrace. But the lie to the accusation was soon unmasked: having fallen grievously ill after the slandering, the woman repented, summoned the clergy and in the presence of many people she confessed her sin. But in this same time period Saint Constantine the Great had died, and onto the throne entered his son Constantius (337-361), who shared the heretical views of Arius and patronised the Arianising bishops. Even in exile Saint Eustathios struggled with all his same zeal for Orthodoxy. He died in exile, in the city of Philippi or Trajanopolis, in the year 337. Convened in the year 381 at Constaninople, the Second OEcumenical Council confirmed the Orthodox Symbol of Faith, which Saint Eustathios had so assiduously defended. The Arian false-teaching was once again anthematised as heretical. In the year 482 the relics of Saint Eustathios were reverently transferred from Philippi to Antioch, to the great joy of the Antioch people, who had not ceased to honour and love their confessor-patriarch. Saint Eustathios was esteemed by the great hierarchs of the IV Century , Basil the Great, John Chrysostom, Athanasias of Alexandria, Epiphanios of Cyprus, Anastasias of Sinai and Jerome of Stridonia. The reknown church historian Bishop Theodorit of Cyr calls Saint Eustathios a pillar of the Church and a man of piety, of an equal footing with Saint Athanasias of Alexandria and the other bishops at the forefront in the struggle for Orthodoxy.

St. George , bishop of Amastris on the Black Sea (805).
Sainted George, Bishop of Amastridea, was from the city of Kromna, nearby the city of Amastridea close to the Black Sea. His pious and illustrious parents Theodore and Migethusa gave him a fine education, both spiritual and secular. Saint George withdrew to a mountain in Syria, where he accepted monasticism and began to lead a strict ascetic life under the guidance of an hermit. After the death of the elder, Saint George resettled at a monastery in Bonissa, and there continued with his efforts. After the death of the bishop of the city of Amastridea, Saint George was chosen bishop by the clergy and the people, and he was ordained at Constantinople by Archbishop Tarasios (784-806, Comm. 25 February). Arriving in Amastridea, Saint George incessantly instructed his flock, he concerned himself about the embellishment of churches, was a defender of widows and orphans, fed the poor, and in everything he gave example of a God-pleasing life. By the power of his prayer he repulsed from the city of Amastridea Saracens that were ravaging the surroundings. He likewise delivered from death Amastridean merchants wrongfully condemned in the city of Trapezund. Saint George died peacefully amidst his flock, , on 3 March , during the reign of the emperor Nicephorus I (802-811).

St. John the Scholastic, patriarch of Constantinople (577).
Sainted John Scholastikos, Patriarch of Constantinople, was educated as a jurist. He accepted the dignity of presbyter, and later he was elevated to the patriarch throne, where he spent the years 565 to 577. While still a presbyter, he compiled a collection of Church Rules in 50 Chapters, and later during his time as patriarch he made a Codex of civil directives, relating to the Church. From these collections was compiled the Nomocanon (i.e. “Law-canon”), used in church administration. Saint John was also the author of the two Church hymns , the “Let us who mystically represent the Cherubim”, and the “At Thy Mystical Supper”.

St. Zachariah, patriarch of Jerusalem (633).
The Monk Zakharios, Patriarch of Jerusalem, lived from the end of the VI to the early VII Centuries. In the year 614 the Persian emperor Chosroes fell upon Jerusalem, looted it, and led into captivity many a Christian, including also Saint Zakharios. Together with his captives, Chosroes seized also the Life-Creating Cross of Christ. During the time of the invasion as many as 90,000 Christians perished. Afterwards Chosroes was compelled to sue for peace with the Byzantine emperor Heraclius (610-641). The Cross of the Lord was returned to Jerusalem. The Christian captives that yet remained alive also were returned, among them Patriarch Zakharios, who died peacefully in the year 633.

Meatfare or Relative’s Suturday, Troparion, Tone VIII
O Thou Who with wisdom profound orderest all things with love, and
Who givest to all what is needful, O only Creator, give rest, O Lord, to the
souls of Thy servants, for on Thee they have set their hope, our Maker and
Builder, and our God.

Kontakion. Tone VIII
With the Saints give rest, O Christ, to the souls of Thy servants,
where there is no pain, no sorrow, no sighing, but life everlasting.

St. Timothy of Symbola in Bithynia; St. Eustace, Archbishop of Antioch,
Troparion, in Tone IV
O God of our fathers,
deal with us ever according to Thy meekness.
Deprive
us not of Thy mercy,
but through their supplications
direct our life in
peace.

Kontakion for the Venerable One, Tone IV “Thou hast appeared today”
Shining forth from the east like a most radiant star,
thou hast shone the
virtues of thy wonders in the hearts of the faithful,
O most blessed
wonderworker Timothy.

“Kozelshchanskaya” Icon of the Most Holy Theotokos, Troparion, in Tone III
O most hymned Theotokos, hope of the world, grant unto us in abundance gifts
of grace from the inexhaustible well-spring of thy wonder-working icon, that we
may cry out in thanksgiving: Rejoice, O most merciful Queen and Mother of
Christians!