John 20:19-31 (9th Matins Gospel)
Then, the same day at evening, being the first day of the week, when the doors were shut where the disciples were assembled, for fear of the Jews, Jesus came and stood in the midst, and said to them, “Peace be with you.” When He had said this, He showed them His hands and His side. Then the disciples were glad when they saw the Lord. So Jesus said to them again, “Peace to you! As the Father has sent Me, I also send you.” And when He had said this, He breathed on them, and said to them, “Receive the Holy Spirit. If you forgive the sins of any, they are forgiven them; if you retain the sins of any, they are retained. Now Thomas, called the Twin, one of the twelve, was not with them when Jesus came. The other disciples therefore said to him, “We have seen the Lord.” So he said to them, “Unless I see in His hands the print of the nails, and put my finger into the print of the nails, and put my hand into His side, I will not believe.” And after eight days His disciples were again inside, and Thomas with them. Jesus came, the doors being shut, and stood in the midst, and said, “Peace to you!” Then He said to Thomas, “Reach your finger here, and look at My hands; and reach your hand here, and put it into My side. Do not be unbelieving, but believing.” And Thomas answered and said to Him, “My Lord and my God!” Jesus said to him, “Thomas, because you have seen Me, you have believed. Blessed are those who have not seen and yet have believed.” And truly Jesus did many other signs in the presence of His disciples, which are not written in this book; but these are written that you may believe that Jesus is the Christ, the Son of God, and that believing you may have life in His name.

Hebrews 1:10-2:3
And:”You, LORD, in the beginning laid the foundation of the earth, And the heavens are the work of Your hands. They will perish, but You remain; And they will all grow old like a garment; Like a cloak You will fold them up, And they will be changed. But You are the same, And Your years will not fail.” But to which of the angels has He ever said:”Sit at My right hand, Till I make Your enemies Your footstool”? Are they not all ministering spirits sent forth to minister for those who will inherit salvation? Therefore we must give the more earnest heed to the things we have heard, lest we drift away. For if the word spoken through angels proved steadfast, and every transgression and disobedience received a just reward, how shall we escape if we neglect so great a salvation, which at the first began to be spoken by the Lord, and was confirmed to us by those who heard Him,

Hebrews 7:26-8:2(Saint)
For such a High Priest was fitting for us, who is holy, harmless, undefiled, separate from sinners, and has become higher than the heavens; who does not need daily, as those high priests, to offer up sacrifices, first for His own sins and then for the people’s, for this He did once for all when He offered up Himself. For the law appoints as high priests men who have weakness, but the word of the oath, which came after the law, appoints the Son who has been perfected forever. Now this is the main point of the things we are saying: We have such a High Priest, who is seated at the right hand of the throne of the Majesty in the heavens, a Minister of the sanctuary and of the true tabernacle which the Lord erected, and not man.

Mark 2:1-12
And again He entered Capernaum after some days, and it was heard that He was in the house. Immediately many gathered together, so that there was no longer room to receive them, not even near the door. And He preached the word to them. Then they came to Him, bringing a paralytic who was carried by four men. And when they could not come near Him because of the crowd, they uncovered the roof where He was. So when they had broken through, they let down the bed on which the paralytic was lying. When Jesus saw their faith, He said to the paralytic, “Son, your sins are forgiven you.” And some of the scribes were sitting there and reasoning in their hearts, Why does this Man speak blasphemies like this? Who can forgive sins but God alone? But immediately, when Jesus perceived in His spirit that they reasoned thus within themselves, He said to them, “Why do you reason about these things in your hearts? Which is easier, to say to the paralytic, ‘Your sins are forgiven you,’ or to say, ‘Arise, take up your bed and walk’? But that you may know that the Son of Man has power on earth to forgive sins-He said to the paralytic, I say to you, arise, take up your bed, and go to your house. Immediately he arose, took up the bed, and went out in the presence of them all, so that all were amazed and glorified God, saying, “We never saw anything like this!”

John 10:9-16 (Saint)
I am the door. If anyone enters by Me, he will be saved, and will go in and out and find pasture. The thief does not come except to steal, and to kill, and to destroy. I have come that they may have life, and that they may have it more abundantly. I am the good shepherd. The good shepherd gives His life for the sheep. But a hireling, he who is not the shepherd, one who does not own the sheep, sees the wolf coming and leaves the sheep and flees; and the wolf catches the sheep and scatters them. The hireling flees because he is a hireling and does not care about the sheep. I am the good shepherd; and I know My sheep, and am known by My own. As the Father knows Me, even so I know the Father; and I lay down My life for the sheep. And other sheep I have which are not of this fold; them also I must bring, and they will hear My voice; and there will be one flock and one shepherd.

St. Gregory Palamas the Archbishop of Thessalonica ( movable holiday on the 2nd Sunday of the Great Lent ). 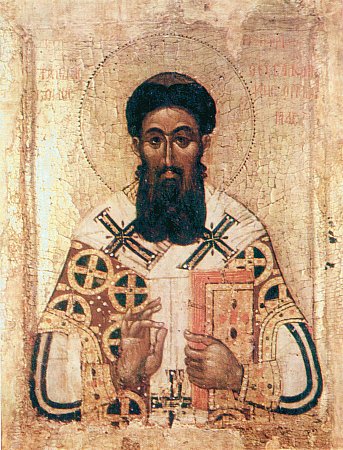 Martyrs Agapius , Publius (Pauplios), Timolaus , Romulus , two named Dionysius , and two named Alexander , at Caesarea in Palestine (303).
The Holy Martyrs Agapios, Puplios, Timolaus, Romilos, Alexander, Alexander, Dionysios and Dionysios suffered under the emperor Diocletian (284-305) in the city of Palestinian Caesarea. At the time of one of the pagan feasts they began to torture and execute Christians who refused to offer sacrifice to idols. At this time the Martyr Timotheos (Comm. 19 August) was sentenced to burning, and the Martyrs Agapios and Thekla (Comm. 19 August) were sentenced to tearing apart by wild beasts. The group of young Christians , Puplios, Timolaus, Alexander, another Alexander, Dionysios, and the subdeacon of the Diaspolis church Romilos , decided publicly to confess their faith and suffer for Christ. As a sign of their voluntary deed they tied themselves together by the feet and appeared before the governor Urban. Seeing their youthfulness, the governor tried to persuade them to refrain from their decision, but in vain. He then threw them in prison, where there were already two Christians , Agapios, undergoing tortures for faith in Christ, and his servant Dionysios. All these saints were subjected to terrible tortures and beheaded.

Hieromartyr Alexander of Side in Pamphylia (270-275).
The PriestMartyr Alexander, Presbyter in Sidon, suffered for Christ during the time of persecution under the emperor Aurelian (270-275). The saint was interrogated by the governor Antoninus and given over to fierce tortures. But miraculously preserved by the Lord, the saint with surprising endurance underwent all the tortures, and finally, he was beheaded. And just as the torturer Antoninus went to go from the judgement place, he became possessed of demons and perished in frenzied convulsions.

Martyr Nicander of Egypt (302).
The Holy Martyr Nikander suffered in Egypt under the emperor Diocletian (284-305). He was a physician and during the time of the persecution he visited Christians locked up in prison, he rendered them help, brought them food, and buried the dead. One time he came to the place where the bodies of killed martyrs were thrown for devouring by wild beasts. Fearing to bury them by day, he waited for night and under cover of darkness buried the bodies. They discovered Saint Nikander and subjected him to terrible tortures: they skinned him alive and then beheaded him (+ c. 302).

St. Hebarestes.
Saint Hebarestes was steward of a church located in Jerusalem.

Synaxis of all Venerable Fathers of the Kiev Caves ( movable holiday on the 2nd Sunday of the Great Lent ).

The Second Sunday of Great Lent. St. Gregory Palamas, Troparion, Tone
VIII
Light of Orthodoxy, pillar and doctor of the Church, adornment of monks,
invincible champion of theologians, O Gregory the wonderworker, praise of
Thessalonica, preacher of grace, ever pray that our souls may be saved.

Kontakion, Tone II
Organ of wisdom, holy and divine, bright clarion of theology, we praise thee
in harmony, O divine speaker Gregory: But as a mind standing before the First
Mind, direct our mind to Him, father, that we may cry: Rejoice, preacher of
grace!

Kontaklon of the Sunday, Tone IV
Now is the time for action, judgment is at our doors. So let us rise and
fast, and let us offer tears of compunction with almsgiving, crying: We have
sinned more than the sand of the sea. But forgive us all, O Creator, that we may
receive incorruptible crowns.

Troparion of the Sunday, Tone I
When the stone had been sealed by the Jews;
while the soldiers were guarding Thy most pure
Body;
Thou didst rise on the third day, O Savior,
granting life to the world.
The powers of
heaven therefore cried to Thee, O Giver of Life:
Glory to Thy Resurrection, O Christ!
Glory to
Thy Kingdom!
Glory to Thy dispensation, O Thou Who lovest mankind.

Hymn to the Theotokos, Tone I
When Gabriel announced to Thee, O Virgin, “Rejoice!”
with that word the Master of all was
incarnate in Thee, O Holy Ark.
As the righteous David said,
Thy womb became more spacious
than the heavens, bearing Thy Creator.
Glory to Him Who took abode in Thee!
Glory to Him
Who came from Thee!
Glory to Him Who freed us by being born of Thee!

Kontakion of the Sunday, Tone I
As God, Thou didst rise from the tomb in glory,
raising the world with Thyself.
Human
nature praises Thee as God, for death has vanished!
Adam exults, O Master!
Eve rejoices,
for she is freed from bondage, and cries to Thee:
Thou art the Giver of Resurrection to all,
O Christ!

Holy Martyr Agapius & His Companions
No Troparion is given in the Menaion.