Luke 1:39-49, 56 (Matins Gospel)
Now Mary arose in those days and went into the hill country with haste, to a city of Judah, and entered the house of Zacharias and greeted Elizabeth. And it happened, when Elizabeth heard the greeting of Mary, that the babe leaped in her womb; and Elizabeth was filled with the Holy Spirit. Then she spoke out with a loud voice and said, “Blessed are you among women, and blessed is the fruit of your womb! But why is this granted to me, that the mother of my Lord should come to me? For indeed, as soon as the voice of your greeting sounded in my ears, the babe leaped in my womb for joy. Blessed is she who believed, for there will be a fulfillment of those things which were told her from the Lord. And Mary said: “My soul magnifies the Lord, And my spirit has rejoiced in God my Savior. For He has regarded the lowly state of His maidservant; For behold, henceforth all generations will call me blessed. For He who is mighty has done great things for me, And holy is His name. And Mary remained with her about three months, and returned to her house.

Philippians 2:5-11(Epistle, Theotokos)
Let this mind be in you which was also in Christ Jesus, who, being in the form of God, did not consider it robbery to be equal with God, but made Himself of no reputation, taking the form of a bondservant, and coming in the likeness of men. And being found in appearance as a man, He humbled Himself and became obedient to the point of death, even the death of the cross. Therefore God also has highly exalted Him and given Him the name which is above every name, that at the name of Jesus every knee should bow, of those in heaven, and of those on earth, and of those under the earth, and that every tongue should confess that Jesus Christ is Lord, to the glory of God the Father.

Luke 10:38-42; 11:27-28 (Gospel, Theotokos)
Now it happened as they went that He entered a certain village; and a certain woman named Martha welcomed Him into her house. And she had a sister called Mary, who also sat at Jesus’ feet and heard His word. But Martha was distracted with much serving, and she approached Him and said, “Lord, do You not care that my sister has left me to serve alone? Therefore tell her to help me.” And Jesus answered and said to her, “Martha, Martha, you are worried and troubled about many things. But one thing is needed, and Mary has chosen that good part, which will not be taken away from her. And it happened, as He spoke these things, that a certain woman from the crowd raised her voice and said to Him, “Blessed is the womb that bore You, and the breasts which nursed You!” But He said, “More than that, blessed are those who hear the word of God and keep it!” 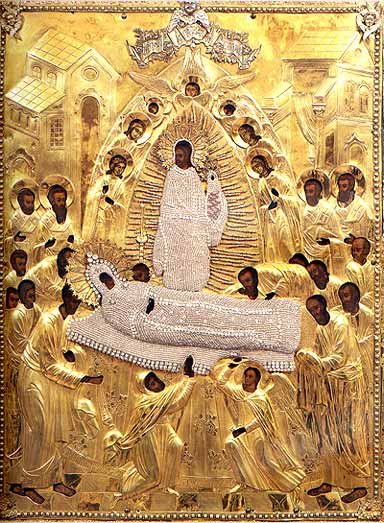 This wonderworking icon representing the Dormition of the Mother of God
was written by the Venerable Dionysius the Deaf in the XV century. Brought by
hermits from its monastery it was put into the parish church of the Semigorodny
District, beyond the Dvinsk River. After the terrible plague that devastated the
Vologda District in XV century, the church stood in desolation for about 150 years.
In 1593, through a special vision, the Starets Julian, from the family of Beloozero
noblemen, found the icon and constructed a monastery on the spot where the holy
icon was found. Now the icon is in the Tupichev Monastery, Mogilev Diocese. The
icon is celebrated on the day of the Descent of the Holy Spirit. 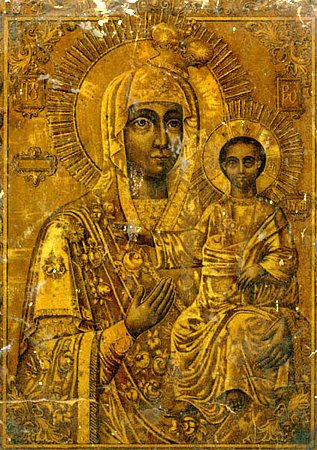 The Icon of the
Mother of God of Galich-Chukhlomsk “Tenderness” [Umilenie]
appeared in the year 1350 to the Monk Avraam of Galich, having come there from
the north for ascetic deeds with the blessing of the Monk Sergei of Radonezh.
On the wild shores of the Galich lake near the large mountain, hidden in the
dense forest, he turned with prayer to the Mother of God, asking Her blessing
for his labours. After prayer the monk sat at rest and suddenly there appeared
on the nearby mountainside a bright light and he heard a voice: “Avraam,
come up the mountain, where is set an icon of My Mother”. The monk went up
the mountain where the light shone, and indeed on a tree found an icon of the
Mother of God with the Praeternal Infant. With tenderness and in gratitude to
God, the holy ascetic took the revealed image and, strengthened by prayers to
the MostHoly Mother of God, he built a the blessed place a chapel, in which he
put the icon. After a certain length of time the Galich prince Dimitrii
Feodorovich, having learned about a trip of the elder, turned to him with a
request to bring the icon. The Monk Avraam rowed across the Galich lake in a
boat and, accompanied by clergy and a throng of people, he took the
wonderworking icon to the cathedral church of the city of Galich. On this day a
large number of the sick were healed from this icon. When the Monk Avraam told
about the appearance of the icon, the prince offered money for the building of
a monastery. Soon there was built a church in honour of the Dormition of the
MostHoly Mother of God, around which arose a monastery. Afterwards the Monk
Avraam founded several more monasteries, the last being founded was the
Chukhlomsk, not far from the city of Chukloma,  from the name of this
monastery the ascetic was named “of Chukhlomsk”, and the
wonderworking icon took on the name “Galich-Chukhlomsk. The commemoration
of this icon is also on 28 May and 15 August.

Icon of Sophia, the Wisdom of God (Novgorod).

Venerable Macarius the Roman, abbot (1550), and his disciple St. Chariton.

Dormition of the All‑holy Mother of God, Troparion, in Tone I
In giving birth thou didst preserve thy virginity,
and in thy falling
asleep thou hast not forsaken the world, O Theotokos.
Thou hast been,
translated to life, as thou art the Mother of Life.
And by thy supplications
thou dost deliver our souls from death.