Galatians 3:23-4:5
But before faith came, we were kept under guard by the law, kept for the faith which would afterward be revealed. Therefore the law was our tutor to bring us to Christ, that we might be justified by faith. But after faith has come, we are no longer under a tutor. For you are all sons of God through faith in Christ Jesus. For as many of you as were baptized into Christ have put on Christ. There is neither Jew nor Greek, there is neither slave nor free, there is neither male nor female; for you are all one in Christ Jesus. And if you are Christ’s, then you are Abraham’s seed, and heirs according to the promise. Now I say that the heir, as long as he is a child, does not differ at all from a slave, though he is master of all, but is under guardians and stewards until the time appointed by the father. Even so we, when we were children, were in bondage under the elements of the world. But when the fullness of the time had come, God sent forth His Son, born of a woman, born under the law, to redeem those who were under the law, that we might receive the adoption as sons.

Mark 6:30-45
Then the apostles gathered to Jesus and told Him all things, both what they had done and what they had taught. And He said to them, “Come aside by yourselves to a deserted place and rest a while.” For there were many coming and going, and they did not even have time to eat. So they departed to a deserted place in the boat by themselves. But the multitudes saw them departing, and many knew Him and ran there on foot from all the cities. They arrived before them and came together to Him. And Jesus, when He came out, saw a great multitude and was moved with compassion for them, because they were like sheep not having a shepherd. So He began to teach them many things. When the day was now far spent, His disciples came to Him and said, “This is a deserted place, and already the hour is late. Send them away, that they may go into the surrounding country and villages and buy themselves bread; for they have nothing to eat. But He answered and said to them, “You give them something to eat.” And they said to Him, “Shall we go and buy two hundred denarii worth of bread and give them something to eat?” But He said to them, “How many loaves do you have? Go and see.” And when they found out they said, “Five, and two fish.” Then He commanded them to make them all sit down in groups on the green grass. So they sat down in ranks, in hundreds and in fifties. And when He had taken the five loaves and the two fish, He looked up to heaven, blessed and broke the loaves, and gave them to His disciples to set before them; and the two fish He divided among them all. So they all ate and were filled. And they took up twelve baskets full of fragments and of the fish. Now those who had eaten the loaves were about five thousand men. Immediately He made His disciples get into the boat and go before Him to the other side, to Bethsaida, while He sent the multitude away. 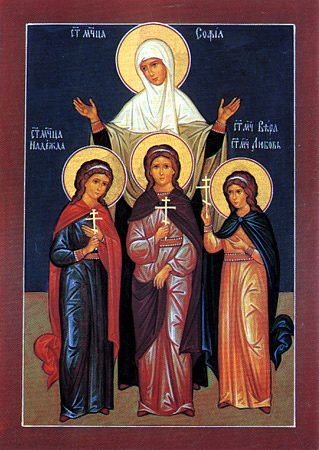 The Holy Martyresses Vera (Faith), Nadezhda (Hope) and Liubov’ (Love) were born in Italy. Their mother, Saint Sophia (Wisdom), was a pious Christian widow. Having named her daughters with the names of the three Christian virtues, Saint Sophia raised them up in love for the Lord Jesus Christ. Saint Sophia and her daughters did not hide their faith in Christ and they openly confessed it before everyone. The official Antiochus made denunciation about them to the emperor Adrian (117-138), who ordered that they be brought to Rome. Realising that they would be taken before the emperor, the holy virgins prayed fervently to the Lord Jesus Christ, asking that He should send them the strength not to fear impending torture and death. When the holy virgins with their mother came before the emperor, everyone present was amazed at their composure: it seemed that they had been called out to some happy festivity, rather than to torture. Summoning the sisters in turn, Adrian urged them to offer sacrifice to the goddess Artemis. The young girls (Vera was 12, Nadezhda was 10 and Liubov’ was 9) remained unyielding. Then the emperor gave orders to fiercely torture them: they burned at the holy virgins over an iron grating, they threw them into a red-hot oven and then into a cauldron with boiling tar, but the Lord by His Unseen Power preserved them. The youngest one, Liubov’, they tied to a wheel and beat at her with canes, until her body was covered all over with bloody welts. And undergoing unreported torments, the holy virgins glorified their Heavenly Bridegroom and remained steadfast in the faith. They subjected Saint Sophia to another and grievous torture: the mother was forced to look upon the suffering of her daughters. But she displayed adamant courage and during this whole while she urged the girls to endure the torments in the Name of the Heavenly Bridegroom. All three maidens with joy met their martyr’s end. They were beheaded.       In order to intensify the inner suffering of Saint Sophia, the emperor decided to let her take up the bodies of her daughters. She placed their remains in coffins and reverently conveyed them on a wagon beyond the city and buried them on an high place. Saint Sophia sat there for three days not leaving the graves of her daughters, and finally she gave up her soul to the Lord. Believers buried her body there also. the relics of the holy martyresses since the year 777 rest at El’zasa, in the church of Esho. 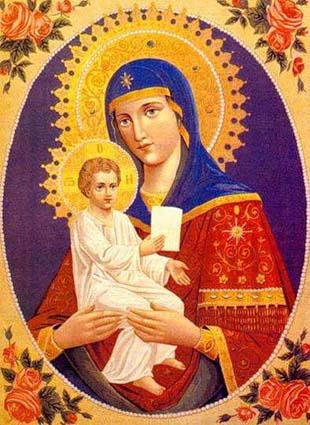 The Makar’ev “Hodegetria” (“Way-Guide”) Icon of the Mother of God appeared during the reign of prince Vasilii Vasil’evich the Dark (1425-1462) to the Monk Makarii the Wonderworker, who asceticised on the desolate shores of the River Unzha.       On 17 September 1442 at about the third hour of the morning, when the Monk Makarii was finishing his usual morning akathist song to the MostHoly Mother of God, his cell was illumined suddenly by an unknown light. The monk became confused in spirit and began fervently to pray. Beyond the cell walls he heard the angelic refrain: “Hail, Thou Full of Grace, O Mother Unwedded!” With fear and astonishment the monk went out from his cell and on the northwest horizon he saw the icon of the Mother of God, surrounded by a luminous radiance. The icon approached towards the cell of the ascetic. With joyful trembling the monk fell to the ground and cried out: “Hail, Mother of God! Hail, Thou Ever-Flowing Fount issuing salvation to all the world and assuring protection and intercession to all the Galich land!” He reverently took up the icon and placed it in his cell, whereby it also came to be named the “Cell-Icon”. Afterwards the disciples of the monk gave it the title of “Makar’ev”. On the place of the appearance of the holy icon was founded a monastery, likewise named Makar’ev. From the Makar’ev Icon of the Mother of God there were made copies, which became reknown just like the original.

Martyr Theodota at Nicaea (230) and Agathoklea .
The Holy Martyress Agathoklea was a servant in the home of a certain Christian named Nicholas. His wife Paulina was a pagan. For eight years Agathoklea underwent abuse from her mistress because of her faith. Paulina fiercely beat the servant, and made her walk barefoot over sharp stones. Once in a fit of nastiness Paulina with a blow from an hammer broke her rib, and then cut out her tongue. Nothing was able to make the saint give in to the demand of her mistress – to worship idols. Then Paulina locked the martyress in prison and exhausted her with hunger. But Agathoklea did not perish: birds brought her food each day. Finally, in a fit of evil, Paulina went to the prison and murdered the holy martyress.

156 Martyrs of Palestine, including bishops Peleus and Nilus, the presbyter Zeno, and the noblemen Patermuthius and Elias (310).
The Holy Martyrs Pelios and Nilos, Bishops of Egypt, Presbyter Zinon, Patermuphias, Ilios and another 151 Martyrs suffered during the reign of the emperor Maximian Galerius (305-311). The majority of them were Egyptians, but there were also some Palestinians among them. The governor of Palestine, Firmilian, arrested 156 Christians. They gouged out the eyes of the holy martyrs, cut the tendons of the feet and subjected them to all manner of tortures. They beheaded 100 of the martyrs, and burned the rest.

Martyrs Lucy, and her son Geminian of Rome (303).
St. Lucy died in peace, and St. Geminian was beheaded in Rome in 303 during the reign of Emperor Maximian.

St. Lambert, hieromartyr of Maastricht (704) (Neth.).
He was born to a noble family in Maastricht (in modern-day Belgium). When his spiritual father Bishop Theodard was killed in 671, St Lambert was elected Bishop of Maastricht despite his youth. He was loved by his flock for his holiness, ascetic labors and almsgiving, but was driven from his see in 675 after his patron King Childeric II was assasinated. He withdrew to the Monastery of Stavelot where he lived for seven years as one of the brethren, claiming no privileges despite his office. Once, getting up to pray during the night, he accidentally disturbed the monastic silence. The Abbot called out for whoever was responsible to do penance by standing barefoot in the snow before a cross outside the monastery church. In the morning the Abbot was dismayed to see the Bishop standing barefoot, covered with snow, before the cross, his face shining. The Abbot sought to apologize, but Lambert replied that he was honored to serve God like the Apostles, in cold and nakedness.   When King Pepin of Heristal took power in 681, he restored Lambert to his see, despite the Saint’s desire to remain in obscurity. The holy bishop renewed his pastoral labors with vigor, visiting the most distant parishes and preaching the Gospel to the pagans who still inhabited the area, despite danger and threats. But when King Pepin put away his wife and replaced her with his concubine Alpais, St Lambert was the only Bishop who dared to rebuke him. For this he incurred the wrath of Alpais, who ordered his death. His assassins carried out their evil commission, even though they found a cross shining above the humble dwelling where he was staying.   Saint Lambert is one of the best-loved Saints of Belgium, where many parish churches are dedicated to him.

Uncovering of the relics of St. John of Shanghai.

Martyrs Sophia and her three daughters, Troparion in Tone IV
In their sufferings, O Lord,
Thy martyrs received
imperishable crowns from Thee our God;
for, possessed of Thy might,
they set
at nought the tormentors and crushed the feeble audacity of the demons.
by
their supplications save Thou our souls.