19th Week after Pentecost. Tone one.
Today is fast-free!

Philippians 1:20-27
according to my earnest expectation and hope that in nothing I shall be ashamed, but with all boldness, as always, so now also Christ will be magnified in my body, whether by life or by death. For to me, to live is Christ, and to die is gain. But if I live on in the flesh, this will mean fruit from my labor; yet what I shall choose I cannot tell. For I am hard-pressed between the two, having a desire to depart and be with Christ, which is far better. Nevertheless to remain in the flesh is more needful for you. And being confident of this, I know that I shall remain and continue with you all for your progress and joy of faith, that your rejoicing for me may be more abundant in Jesus Christ by my coming to you again. Only let your conduct be worthy of the gospel of Christ, so that whether I come and see you or am absent, I may hear of your affairs, that you stand fast in one spirit, with one mind striving together for the faith of the gospel,

Luke 9:7-11
Now Herod the tetrarch heard of all that was done by Him; and he was perplexed, because it was said by some that John had risen from the dead, and by some that Elijah had appeared, and by others that one of the old prophets had risen again. Herod said, “John I have beheaded, but who is this of whom I hear such things?” So he sought to see Him. And the apostles, when they had returned, told Him all that they had done. Then He took them and went aside privately into a deserted place belonging to the city called Bethsaida. But when the multitudes knew it, they followed Him; and He received them and spoke to them about the kingdom of God, and healed those who had need of healing.

Sainted John, Bishop of Suzdal’, entered one of the monasteries of Suzdal’ in his youthful years. For his virtuous and humble life, the saint was made the first bishop of Suzdal’ and Nizhegorod in 1350. Bishop John merited a great mercy of God: during the time of Divine Liturgy the Suzdal’ prince Boris Konstantinovich saw, how an Angel of God attended the saint. Saint John was known for his love towards the destitute and the sick; for the poor he interceded before the princes about an amelioration of taxes, and for the sick he built poor-houses and hospices. The saint was much concerned about enlightening the pagan Mordvians with the Christian faith. After the annexation of Suzdal’ to the Moscow metropolitanate, Saint John took the monastic schema and withdrew to the Bogoliubsk monastery. He lived there in seclusion and died peacefully. Numerous miracles were witnessed to at the grave of the saint.

Icon of the Most Holy Theotokos “She Who Ripens the Grain” (19th c.). 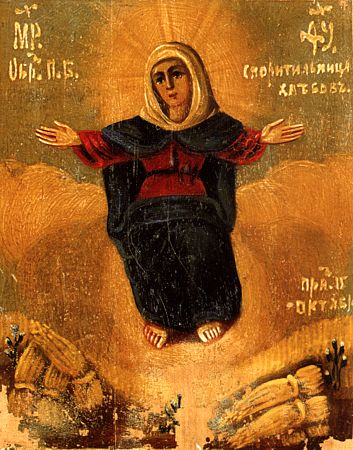 The Icon of the Mother of God, named “Prosperess of Loaves” (“Sporitel’nitsa Khlebov”), was written at the blessing of the starets-elder of the Visitation Optina wilderness monastery, the priest-schemamonk Amvrosii (Ambrosii) (23/XI/1812 – 10/X/1891). Father Amvrosii, a great Russian ascetic of the XIX Century, was ardent with a childlike faith towards the Mother of God. He in particular revered all the feastdays of the Mother of God and on these days he redoubled his prayer. With the icon, “Prosperess of Loaves”, Father Amvrosii blessed the Shamordinsk women’s monastery established in honour of the Kazan Icon of the Mother of God, and founded by him not far from the Optina monastery.       On this icon the Mother of God is depicted sitting upon the clouds, and Her hands are extended in blessing. Beneathe – is a compressed field, and on it amidst the grass and flowers stand and lay sheaves of rye. Starets Amvrosii himself decreed the day of celebration – 15 October, and called the image “Prosperess of Loaves”, indicating by this, that the MostHoly Mother of God – “is an Helper for people in their labours for the acquiring of their daily bread”. Before his blessed death, Father Amvrosii ordered a large quantity of photo-replicas of this icon and distributed and sent them off to his spiritual children. For the singing of an akathist before the holy image, the starets composed a particular response: “Hail, Thou Full-of-Grace, the Lord is with Thee! Grant unto us unworthy ones the dew of Thy grace and the showing forth of Thine mercy!”       The day of burial of Father Amvrosii happened on 15 October – the feastday of the icon. The first miracle from the holy icon was witnessed in 1891, when throughout Russia was a famine because of crop-failure, but in the Kaluzh district and on the fields of the Shamordinsk monastery grain was produced. In 1892, already after the death of Father Amvrosii, his attendant Ivan Feodorovich Cherepanov sent a copy from the icon to the Pyatnitsk women’s monastery in Voronezh district. In this locale there was a drought and famine threatened, but soon after a molieben served before the icon, “Prosperess of Loaves”, it rained and ended the drought.

Venerable Euthymius the New of Thessalonica, monk of Mt. Athos (889).
The Monk Euthymios the New, of Soluneia (Thessalonika), in the world was named Nikita, and he was a native of the city of Ancyra in Galatia. His parents, Epiphanios and Anna, led virtuous Christian lives, and their son was from childhood meek, pious and obedient. At age seven he was left fatherless and he soon became the sole support of his mother in all matters. Having entered military service, Nikita married, on the insistence of his mother. After the birth of a daughter he secretly left home, in order to enter a monastery. And for 15 years the Monk Euthymios asceticised on Mount Olympus, where he learned monastic deeds from the elders.       The monk then resettled to Holy Mount Athos. Along the way, having learned that his mother and wife were in good health, he informed them that he had become a monk, and he sent them a cross, calling on them to follow his example. On Athos the monk accepted the great schema and lived for three years in a cave, in total silence, struggling with temptations. And for a long time Saint Euthymios asceticised upon a pillar, not far from Soluneia, instructing those coming to him for advice and healing the sick. The monk so very much cleansed his mind and heart, that he was vouchsafed Divine visions and revelations. At the command of the Lord, Saint Euthymios founded two monasteries in 863 on Mount Peristeros, not far from Soluneia, which he guided for 14 years, with the dignity of deacon. In one of these his wife and mother accepted monastic tonsure. Before death the monk settled on an islet of Athos, where he reposed in 889. His remains were transferred to Soluneia. The Monk Euthymios is termed the “New” in distinction from the Monk Euthymios the Great (Comm. 20 January).

Martyr Lucian , presbyter of Greater Antioch (312).
The Monk Martyr Lucian, Presbyter of Antioch, was born in the Syrian city of Samosata. At 12 years of age he was left orphaned. Lucian distributed his possessions to the poor, and went to the city of Edessa to the confessor Makarios, under the guidance of whom he diligently read Holy Scripture and learned the ascetic life. For his pious and zealous spreading of Christianity amongst the Jews and pagans, Lucian was made presbyter. At Antioch Saint Lucian opened a school, where there gathered many students whom he instructed in book wisdom. Saint Lucian occupied himself with teaching work, and he corrected the text of Holy Scripture, having been corrupted by copyists and heretics. (The entire Greek text of the Bible corrected by him was hidden away in a wall during the time of his confessor’s deed, and it was found during the time of Saint Constantine the Great). During the persecution of Diocletian, Saint Lucian was arrested, having been informed on by heretics, and he was dispatched to prison in Nicomedia, where over the course of 9 years he encouraged Christians together with him in the confessor’s deed, urging them not to fear tortures and death.       Saint Lucian died in prison from many terrible tortures and hunger. Before death, wanting to partake of the Holy Mysteries of Christ on the feast of Theophany, the priestmartyr – bound by chains to a box, was compelled to offer the Bloodless Sacrifice upon his chest, and all the Christians situated there in prisoned communed. The body of the holy martyr was thrown into the sea, but after 30 days dolphins brought it to shore. Believers with reverence buried the body of the much-suffering Saint Lucian.

Martyrs Sarbelus and Bebai (Barbea) of Edessa (2nd c.).
The Holy Martyrs Sarbilos and Bebea – were brother and sister by birth, suffering in the II Century under the emperor Trajan for confessing Christianity. The Martyr Sarbilos was an idolous priest at Edessa, but having been converted to Christ by a certain bishop, he accepted Baptism with his sister. Pagans tortured the saints for a long while, and then beheaded them.

St. Sabinus , bishop of Catania (760).
Sainted Sabinus, Bishop of the city of Catania in Sicily, fervently wanting to serve the Lord, withdrew into the wilderness. Here he led a strict ascetic life and received from the Lord gifts of wonderworking and perspicacity.

Venerable Father Euthymius the New, Troparion, Tone VIII
In thee, O father, that which was created according to the image of God was
manifestly saved.
For accepting thy cross thou didst follow after Christ,
and
praying thou didst learn to disdain the flesh,
for thou didst transcend it to
take care of thine immortal soul.
Wherefore, with the angels doth thy soul
rejoice, O venerable Euthymius.

Venerable Martyr Lucian of Antioch, Troparion, Tone IV
Thy martyr Lucian, O Lord,
hath in his sufferings received an imperishable
crown from Thee our God,
for, possessed of Thy might,
he cast down his
tormentors and set at naught the feeble audacity of the demons.
By his prayers
do Thou save our souls.

Kontakion of the Martyr (after Ode III), Tone II “The grave and mortality”
With Hymns let us all gloriously honor
as a most splendid luminary Lucian,

who shone forth in fasting
and later was radiant in suffering,
and who
prayeth unceas­ingly for us all.