1 Thessalonians 1:6-10
And you became followers of us and of the Lord, having received the word in much affliction, with joy of the Holy Spirit, so that you became examples to all in Macedonia and Achaia who believe. For from you the word of the Lord has sounded forth, not only in Macedonia and Achaia, but also in every place. Your faith toward God has gone out, so that we do not need to say anything. For they themselves declare concerning us what manner of entry we had to you, and how you turned to God from idols to serve the living and true God, and to wait for His Son from heaven, whom He raised from the dead, even Jesus who delivers us from the wrath to come.

Luke 12:42-48
And the Lord said, “Who then is that faithful and wise steward, whom his master will make ruler over his household, to give them their portion of food in due season? Blessed is that servant whom his master will find so doing when he comes. Truly, I say to you that he will make him ruler over all that he has. But if that servant says in his heart, ‘My master is delaying his coming,’ and begins to beat the male and female servants, and to eat and drink and be drunk, the master of that servant will come on a day when he is not looking for him, and at an hour when he is not aware, and will cut him in two and appoint him his portion with the unbelievers. And that servant who knew his master’s will, and did not prepare himself or do according to his will, shall be beaten with many stripes. But he who did not know, yet committed things deserving of stripes, shall be beaten with few. For everyone to whom much is given, from him much will be required; and to whom much has been committed, of him they will ask the more. 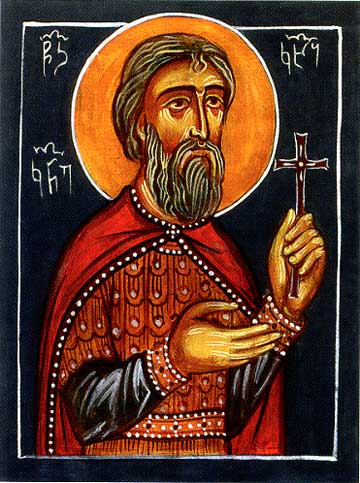 The 9th century was one of the most difficult periods in Georgian history. The Arab Muslims wreaked havoc throughout the region of Kartli, forcibly converting many to Islam with fire and the sword. Many of the destitute and frightened were tempted to betray the Faith of their fathers.       At that time the valorous aristocrat and faithful Christian, Prince Constantine, was living in Kartli. He was the descendant of Kakhetian princes, hence his title Kakhi.       As is meet for a Christian believer, St. Constantine considered himself the greatest of sinners and often said, There can be no forgiveness of my sins, except through the spilling of my blood for the sake of Him Who shed His innocent blood for us!       While on a pilgrimage to the holy places of Jerusalem, Constantine distributed generous gifts to the churches, visited the wilderness of the Jordan, received blessings from the holy fathers, and returned to his motherland filled with inner joy. After that time Constantine would send thirty thousand pieces of silver to Jerusalem each year.       In the years 853 to 854, when the Arab Muslims invaded Georgia under the command of Buga-Turk, the eighty-five-year-old Prince Constantine commanded the army of Kartli with his son Tarkhuj.       Outside the city of Gori an uneven battle took place between the Arabs and the Georgians. Despite their fierce resistance, the Georgians suffered defeat, and Constantine and Tarkhuj were taken captive.       The captive Constantine-Kakhi was sent to Samarra (a city in central Iraq) to the caliph Jafar al Mutawakkil (847-861). Jafar was well aware of the enormous respect Constantine-Kakhi received from the Georgians and all the Christian people who knew him. Having received him with honor, he proposed that Constantine renounce the Christian Faith and threatened him with death in the case of his refusal. Strengthened by divine grace, the courageous prince fearlessly answered, Your sword does not frighten me. I am afraid of Him Who can destroy my soul and body and Who has the power to resurrect and to kill, for He is the true God, the almighty Sovereign, Ruler of the world, and Father unto all ages!       The enraged caliph ordered the beheading of St. Constantine-Kakhi. Bowing on his knees, the holy martyr lifted up a final prayer to the Lord. St. Constantine-Kakhi was martyred on November 10, 852, the day on which Great-martyr George is commemorated. The holy martyrs body was hung from a high pillar to intimidate the Christian believers, but after some time it was buried.       A few years later a group of faithful Georgians translated St. Constantines holy relics to his motherland and reburied them there with great honor. In that same century the Georgian Orthodox Church numbered Prince Constantine-Kakhi of Kartli among the saints.

Commemoration of the torture of Great-martyr George in 303. ( Georgia ). 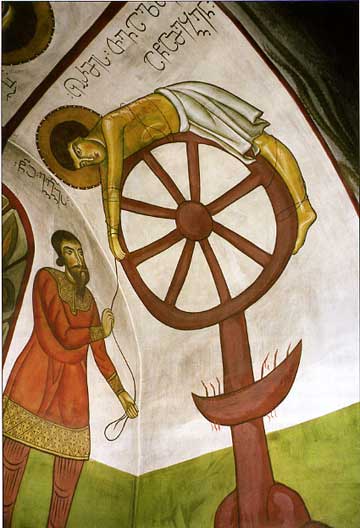 Celebrated by the whole Christian world, Great-martyr George was slain by Emperor Diocletian in the year 303.       The holy martyr is appropriately considered the intercessor for all Christians and the patron saint of many. He is regarded with special reverence among the Georgian people, since he is believed to be the special protector of their nation. Historical accounts often describe how St. George appeared among the Georgian soldiers in the midst of battles.       The majority of Georgian churches (in villages especially) were built in his honor and, as a result, every day there is a feast of the great-martyr George somewhere in Georgia. The various daily commemorations are connected to one of the churches erected in his name or an icon or a particular miracle he performed.       November 10 marks the day on which St. George was tortured on the wheel. According to tradition, this day of commemoration was established by the holy Equal-to-the-Apostles Nino, the Enlightener of Georgia. St. Nino was a relative of St. George the Trophy-bearer.       She revered him deeply and directed the people she had converted to Christianity to cherish him as their special protector.

Apostles Erastus, Olympas, Herodion, Sosipater, Quartus, and Tertius of the Seventy (1st c.).
The Holy Disciples from the 70: Herastos, Olympos, Rodion, Sosipater, Kuartos (Quartus) and Tercias lived during the I Century.       Saint Rodion, or Herodian, was a kinsman of the Apostle Paul (Rom. 16: 11), and left the bishop’s cathedra (chair) at Patras so as to go to Rome with the Apostle Peter. The holy Disciple Olympos (or Olympian), – about whom the holy Apostle Paul recollects (Rom. 16: 15), was also a companion of the Apostle Peter. Both of these Disciples from the 70 were beheaded on the very day and hour, when the Apostle Peter was crucified.       The holy Disciples Herastos, Sosipater, Quartus and Tercias were disciples of the holy Apostle Paul. The Apostle to the Gentiles speaks of them in the Epistle to the Romans: “Jason and Sosipater, my kinsmen, do greet you…” (Rom. 16: 21); “And also do I, Tercias, who wrote down this epistle, greet you” (Rom. 16: 22); “And Herastos, the city treasurer, doth greet you, and brother Quartus” (Rom. 16: 23).       The Disciple Sosipater, a native of Achaeia, was bishop of Iconium where also he died. The Disciple Herastos was at first a deacon and treasurer of the Jerusalem Church, and later on bishop at Paneadis. The holy Disciple Quartus endured much suffering for his piety and converted many pagans to Christ, dying peacefully in the dignity of bishop in the city of Beirut. The holy Disciple Tercias, having written down the dictation of the Apostle Paul contained in the Epistle to the Romans, was the second bishop of Iconium, where also he died.

Martyr Orestes of Cappadocia (304).
The Holy Martyr Orestes lived at the end of the III Century in the city of Tiana in Cappadocia during the time of the emperor Diocletian. He was an illustrious and capable soldier, and from childhood Saint Orestes was truly a good Christian.       By order of the emperor, the military-officer Maximinus was dispatched to Tiana for dealing with Christianity, which then had spread widely throughout Great Cappadocia. Orestes was among the first brought to trial to Maximinus. He bravely and openly confessed his faith in our Crucified and Risen Lord Jesus Christ. The prosecutor offered the saint riches, honours and reknown for renouncing the One True God, but Saint Orestes was unyielding. By order of Maximinus, they took Orestes to a resplendid pagan temple and again demanded he worship idols. When he refused, 40 soldiers, taking turns one after the other, beat the holy martyr with lashes, with canes, with rawhide, and then they tormented him with fire. Saint Orestes cried out to the Lord: “Oh God, make with me a sign of blessing, let those hating me see it and be put to shame”. And the Lord heard His true servant. The earth began to tremble, and the idols fell down and were smashed. Everyone rushed out of the temple, and when Saint Orestes came out, the very temple tumbled down.       Infuriated, Maximinus ordered the holy martyr to be locked up in prison for seven days giving him neither food nor drink, and on the eighth day to continue with the torture. They wedged nails into the heels of the martyr, and then tied him to a wild horse. Dragged over the stones, the holy martyr expired to the Lord in the year 304. His relics were thrown into the sea.       When many years had passed, in 1685, a certain monk of the Kievo-Pechersk Lavra (Dimitrii, afterwards the Sainted-Hierarch of Rostov, Comm. 28 October) was copying from an ancient manuscript the Life of Saint Orestes. He became tired and fell asleep. The holy martyr appeared to him in a dream vision and, having shown him the deep wound in his chest and the lacerated sinews of his arms and bruised knees, he bid him to add these into his life, since not all the torments which befell the saint were recorded in the ancient manuscript. The humble monk carried out the wish of the holy Martyr Orestes and he gave praise to God, Who is Wondrous in His Saints.

Hieromartyr Milos (Miles), bishop in Persia (341), and two disciples.
The PriestMartyr Milios, Bishop of Persia, and his two Disciples, lived during the IV Century. The holy Martyr Milios was banished from the city of Suza, where his bishop’s cathedra was situated. By his pious and ascetic life he was vouchsafed gifts of prophecy and healing. The saint suffered in the year 341 with two if his students, Abrosim and Sinos [trans. note: this text variance of name from the header above is in the Russian original, perhaps reflecting alternate Graeco-Russian transcriptions of Persian names], in their native city of Suza. They returned there after long wanderings and brought many to Christ.

St. Nonnus, bishop of Heliopolis (471).
At first he was tonsured a monk in the Tabennis Monastery where he became known for his great asceticism. In 448 he was elected Bishop of Edessa, and in 451 he was translated to Heliopolis. Here St. Nonnus successfully worked to bring the Arabs to Christ (see October 8). He died in 471.

Translation of the relics of St. Gregory, presbyter, in Assos of Lesbos (Greek).

Apostles Erastus, Olympus, Rodion, and those with them, Troparion,
Tone III
O holy apostles
entreat the merciful God
that He grant to our souls
remission of transgressions.

Kontakion, Tone IV “Thou hast appeared”
Today hath dawned the honored festival of the apostles
which doth manifestly
bestow the remission of sins
upon all that keep their memory.