John 10:1-9 (Matins Gospel)
Most assuredly, I say to you, he who does not enter the sheepfold by the door, but climbs up some other way, the same is a thief and a robber. But he who enters by the door is the shepherd of the sheep. To him the doorkeeper opens, and the sheep hear his voice; and he calls his own sheep by name and leads them out. And when he brings out his own sheep, he goes before them; and the sheep follow him, for they know his voice. Yet they will by no means follow a stranger, but will flee from him, for they do not know the voice of strangers. Jesus used this illustration, but they did not understand the things which He spoke to them. Then Jesus said to them again, “Most assuredly, I say to you, I am the door of the sheep. All who ever came before Me are thieves and robbers, but the sheep did not hear them. I am the door. If anyone enters by Me, he will be saved, and will go in and out and find pasture.

Hebrews 7:26-8:2 (St. John)
For such a High Priest was fitting for us, who is holy, harmless, undefiled, separate from sinners, and has become higher than the heavens; who does not need daily, as those high priests, to offer up sacrifices, first for His own sins and then for the people’s, for this He did once for all when He offered up Himself. For the law appoints as high priests men who have weakness, but the word of the oath, which came after the law, appoints the Son who has been perfected forever. Now this is the main point of the things we are saying: We have such a High Priest, who is seated at the right hand of the throne of the Majesty in the heavens, a Minister of the sanctuary and of the true tabernacle which the Lord erected, and not man.

John 10:9-16 (St. John)
I am the door. If anyone enters by Me, he will be saved, and will go in and out and find pasture. The thief does not come except to steal, and to kill, and to destroy. I have come that they may have life, and that they may have it more abundantly. I am the good shepherd. The good shepherd gives His life for the sheep. But a hireling, he who is not the shepherd, one who does not own the sheep, sees the wolf coming and leaves the sheep and flees; and the wolf catches the sheep and scatters them. The hireling flees because he is a hireling and does not care about the sheep. I am the good shepherd; and I know My sheep, and am known by My own. As the Father knows Me, even so I know the Father; and I lay down My life for the sheep. And other sheep I have which are not of this fold; them also I must bring, and they will hear My voice; and there will be one flock and one shepherd. 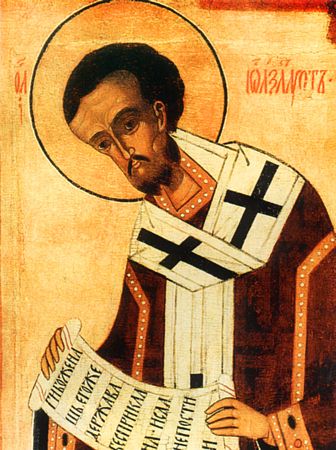 Martyrs Antoninus, Nicephorus, and Germanus of Caesarea in Palestine (308).
They suffered for Christ in Caesarea, Palestine in the year 308 during the reign of Emperor Maximinian Galerius. For confessing Christ all three saints were beheaded with a sword.

Martyr Manetha of Caesarea in Palestine (308).
She suffered in Caesarea, Palestine in the year 308, during the reign of the Emperor Maximinian Galerius. For confessing Christ she was committed to the flames.

New Martyr Damascene of Mt. Athos (1681).
Born in Constantinopolitan Galatia, he in youth without understanding accepted Islam, but then he sincerely repented and left for Mount Athos, where for over 12 years he mourned his denial of Christ. After this, he showed up in Constantinople, and began publicly to accuse Mohamed and confess Christ, for which the Turks beheaded him in 1681. Note that November 15 begins the Christmas Lent, and the 14th should be the last day before Lent; but if the 14th falls on a Wednesday or a Friday, the last day before Lent should be the 13th, because on a Wednesday or a Friday before the Christmas fast one does not eat meat.

Saint John Chrysostom, Archbishop of Constantinople, Troparion, Tone
VIII
Grace shining forth from thy mouth like a beacon hath illumined the
universe,
and disclosed to the world treasures of uncovetousness, and shown us
the heights of humility;
but while instructing by thy words, O father John
Chrysostom.
intercede with the Word, Christ our God, to Save our souls.