2 Timothy 3:16-4:4
All Scripture is given by inspiration of God, and is profitable for doctrine, for reproof, for correction, for instruction in righteousness, that the man of God may be complete, thoroughly equipped for every good work. I charge you therefore before God and the Lord Jesus Christ, who will judge the living and the dead at His appearing and His kingdom: Preach the word! Be ready in season and out of season. Convince, rebuke, exhort, with all longsuffering and teaching. For the time will come when they will not endure sound doctrine, but according to their own desires, because they have itching ears, they will heap up for themselves teachers; and they will turn their ears away from the truth, and be turned aside to fables.

Mark 8:22-26
Then He came to Bethsaida; and they brought a blind man to Him, and begged Him to touch him. So He took the blind man by the hand and led him out of the town. And when He had spit on his eyes and put His hands on him, He asked him if he saw anything. And he looked up and said, “I see men like trees, walking.” Then He put His hands on his eyes again and made him look up. And he was restored and saw everyone clearly. Then He sent him away to his house, saying, “Neither go into the town, nor tell anyone in the town.”

Hieromartyr Eleutherius , bishop of Illyria, and his mother, Martyr Anthia and Martyr Corivus the Eparch (126). 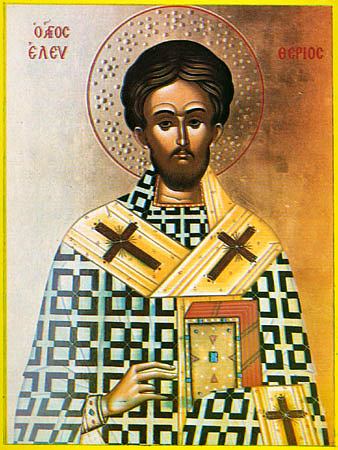 The PriestMartyr Eleutherius, his mother the Martyress Anthea and the Martyr Corivus the Eparch: Saint Eleutherius, the son of an illustrious Roman citizen, was raised in Christian piety by his mother. His virtue was such, that already at age 20 he had been elevated to bishop of Illyria. Under the emperor Adrian (II), Saint Eleutherius after torture for his bold preaching about Christ was beheaded at Rome together with his mother Anthea. The eparch Corivus, who had tortured Saint Eleutherius, himself came to believe in Christ and was executed.

Venerable Tryphon , of Pechenga or Kola (1583), and his martyred disciple Venerable Jonah . 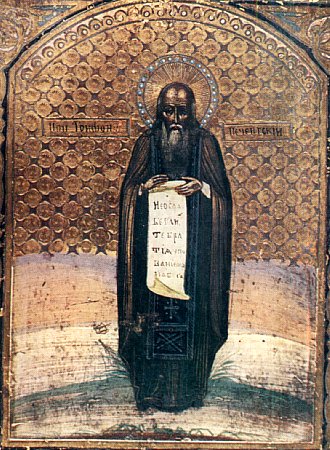 The Monk Jona of Pechengsk and Kol’sk was by tradition a priest in the city of Kola. After the death of his daughter and wife he went off to the Pechengsk Trinity monastery, situated in the vicinity of Kola, and became a student of its founder, the Monk Tryphon. After the death of his teacher, he settled in 1583 at the site of what was to become his grave in the neighbouring Uspensk wilderness, and here he was killed by the Swedes in the year 1590. 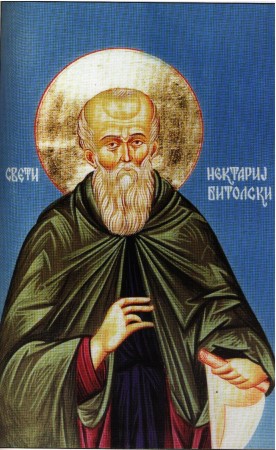 The Monk Nektarii of Bitel’sk was born in the small town of Bitl’ (or Butili) in Bulgaria. In the world he was named Nikolai. Before the occurrence of a Turkish invasion he mother had a vision: the MostHoly Virgin Herself appeared and bid her to flee and go into hiding with her husband and children. Nikolai’s father, having taken the boy with him, withdrew to a monastery dedicated to the UnMercenaries, not far from Bitel’, where he accepted monasticism with the name Pakhomii. Nikolai, having reach adolescent age, went on to Athos. The perspicacious elder Philothei accepted him and endowed him into the Angelic form with the name Nektarii. The monk suffered for a long time from the envy and spite of one of the novices, but he showed him in return total humility. The monk distinguished himself by his charity: money that he obtained from his handicraft he distributed to the poor. The Monk Nektarii died in the year 1500.

Venerable Paul of Mt. Latros (956).
The Monk Paul of Latreia was a native of the city of AElen in Pergamum. Early bereft of his father, he was educated at the monastery of Saint Stephen in Phrygia; after the death of his mother, he devoted himself completely to monastic deeds at a monastery on Mount Latra, near Miletos. Wanting to gain yet loftier accomplishment, he secluded himself in a cave. For his ascetic deeds he gained the gifts of perspicacity and wonderworking. The emperor Constantine VII Porphyrigenitos (912-959) often wrote to the monk, asking his prayers and counsel. The Monk Paul twice withdrew to the island of Samos, where he established a laura monastery and restored three monasteries ravaged by the Hagarites (Arabs). Foretelling his end, the monk reposed to God in the year 955.

St. Stephen the Confessor, archbishop of Surozh in the Crimea (790).
Sainted Stephen the Confessor, Archbishop of Surozh, was a native of Cappadocia and was educated at Constantinople. Having taken monastic vows, he withdrew into the wilderness, where he passed the time for 30 years in ascetic deeds. Patriarch Germanos, through some particular revelation, ordained him bishop of the city of Surozh (presently the city of Sudak in the Crimea). Under the iconoclast emperor Leo III the Isaurian (716-741), Saint Stephen underwent tortures and imprisonment in Constantinople, from which he emerged after the death of the emperor. Already quite advanced in years, he returned to his flock in Surozh, where he died.       There is preserved an account how, at the beginning of the IX Century during the time of a campaign into the Crimea, and influenced by miracles at the crypt of the saint, the Russian prince Bravlin accepted Baptism.

Martyr Eleutherius at Constantinople (4th c.).
The Holy Martyr Eleutherios Cubicularius was an illustrious and rich chamberlain (“cubicularius”) at the Byzantine court. Amidst all his courtly privileges, Eleutherios was not beguiled by worldly goods and honours; he dwelt constantly in thought about the imperishable and eternal. Having accepted holy Baptism, he began daily to glorify God with psalmody and to bejewel his life with virtuous deeds. But one of his servants through diabolic promptings, informed against his master to the [then still pagan] emperor. The emperor tried to dissuade Eleutherios from his faith in Christ, but after the unsuccessful attempts the emperor gave orders to behead him, and to cast out his body for devouring by dogs and vultures. A certain Christian priest took up the body of the saint and committed it to burial.       A second commemoration of the martyr is under – 4 August.

Venerable Pardus , hermit of Palestine (6th c.).
The Monk Pardus the Hermit, a Roman, was involved in his youth with the teamster’s craft. One time when he set off to Jericho, a boy accidentally fell under the legs of his camels. The camels trampled the boy to death. Shaken by this occurrence, Pardus took monastic vows, and withdrew to Mount Arion. Thinking himself under the condemnation of a murderer, and seeking a punishment of death, the Monk Pardus entered the cave-den of a lion. He poked the wild beast and prodded it with a spear so that the lion would rend him apart, but the creature would not touch the hermit. The Monk Pardus then took off his clothes and lay down upon the path that the lion would take for water. But even here, the lion merely leaped over the hermit. And the elder then perceived, that he had been forgiven by the Lord. Having returned to his mountain, the Monk Pardus dwelt there in fasting and prayer until the end of his days. He died in the VI Century.

Monk-martyr Bacchus of Mar Saba (8th c.).
During the reign of Constantine VI and Irene, restorers of the holy icons, the Holy Land was under the control of the Muslim Arabs. Many Christians there apostatized, putting honors and security in this world above their eternal joy. One of these was the father of this Saint, who brought up seven children as Muslims. His wife however, never renounced her Faith and prayed constantly for the conversion of her husband and children. Upon the death of the father, her third son Dachak declared that he wished to become a Christian. He was baptized in the Monastery of St Sabas near Jerusalem, receiving the name Bacchus, and determined to be a monk. But the abbot, fearing reprisals against the Monastery, sent him back to his home in Jerusalem. His brothers, seeing his joy and boldness in confessing the Faith, decided to receive holy Baptism, except for one, who denounced Bacchus to the authorities. He was arrested and brought before the judge and, when he proved steadfast in his confession of Christ, was beheaded.

Synaxis of All Saints of Crimea.

Synaxis of All Saints of Kolsk.

Hieromartyr Eleutherius, Tone IV
As thou didst share in the ways of the apostles
and didst occupy their
throne,
thou didst find thine activity to be a passage to divine vision,
O
divinely inspired one.
Wherefore, ordering the word of truth,
thou didst
suffer for the Faith even to the shedding of thy blood.
O hieromartyr
Eleutherius, entreat Christ God, that our souls be saved.

Venerable Paul of Mount Latros; Troparion, Tone IV
O most glorious Paul, we hymn thee
as one who dwelleth together with the
incorporeal hosts
and as a companion of all the venerable,
and we beseech
thee:
Pray thou ever for us, that we may find mercy.

Kontakion for the Venerable one, Tone VIII “To thee, the Champion Leader”
From thy youth, O wise one, thou didst manfully desire that which passeth
understanding
and didst forsake the tumult of the world.
For thy divine way of
life thou becamest a dwelling-place of the Trinity,
and hast illumined those
who have recourse to thee with faith.
Wherefore, we cry out: Rejoice, O Paul
who art most rich!