2 Timothy 4:9-22
Be diligent to come to me quickly; for Demas has forsaken me, having loved this present world, and has departed for ThessalonIca-Crescens for Galatia, Titus for Dalmatia. Only Luke is with me. Get Mark and bring him with you, for he is useful to me for ministry. And Tychicus I have sent to Ephesus. Bring the cloak that I left with Carpus at Troas when you come-and the books, especially the parchments. Alexander the coppersmith did me much harm. May the Lord repay him according to his works. You also must beware of him, for he has greatly resisted our words. At my first defense no one stood with me, but all forsook me. May it not be charged against them. But the Lord stood with me and strengthened me, so that the message might be preached fully through me, and that all the Gentiles might hear. Also I was delivered out of the mouth of the lion. And the Lord will deliver me from every evil work and preserve me for His heavenly kingdom. To Him be glory forever and ever. Amen! Greet Prisca and Aquila, and the household of Onesiphorus. Erastus stayed in Corinth, but Trophimus I have left in Miletus sick. Do your utmost to come before winter. Eubulus greets you, as well as Pudens, Linus, Claudia, and all the brethren. The Lord Jesus Christ be with your spirit. Grace be with you. Amen.

Mark 8:30-34 (Wednesday)
Then He strictly warned them that they should tell no one about Him. And He began to teach them that the Son of Man must suffer many things, and be rejected by the elders and chief priests and scribes, and be killed, and after three days rise again. He spoke this word openly. Then Peter took Him aside and began to rebuke Him. But when He had turned around and looked at His disciples, He rebuked Peter, saying, “Get behind Me, Satan! For you are not mindful of the things of God, but the things of men.” When He had called the people to Himself, with His disciples also, He said to them, “Whoever desires to come after Me, let him deny himself, and take up his cross, and follow Me. 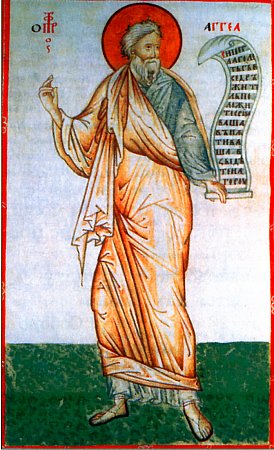 The Holy Prophet Aggei (Haggai) – was the 10th of the Twelve Minor Prophets. He was of the Tribe of Levi and he prophesied during the times of the Persian emperor Darius Hystaspis (prior to 500 B.C.). Upon the return of the Jews from the Babylonian Captivity, he persuaded the people to build the Second Jerusalem Temple and he proclaimed, that in this Temple was to “appear the Word Without-Beginning in the finality of times”. 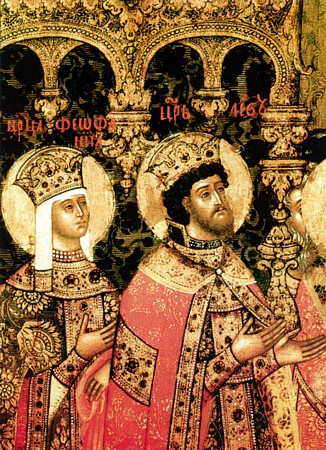 The Blessed Empress Theophania (Theophano) was the first spouse of the emperor Leo VI the Wise (886-911). She was slandered as having lived together with a man, being with him even after ascending the throne, and she was locked away in prison for three years. Receiving her freedom, she spent her life in prayer and fasting. Her gentleness, charity and heartfelt contrition for sins glorified her name among her contemporaries. Theophania died in either the year 893 or 894.

Venerable Sophia , nun (in the world Solomonia), wife of Grand Duke Basil III (1542).
The Nun Sophia, in the world Solomonia, a great-princess, was the daughter of the boyar-noble Yurii Konstantinovich Saburov. In the year 1505 she was chosen as bride by the heir to the throne, the future great-prince Vasilii Ioannovich. Their marriage was unhappy, because Solomonia remained childless. In order to have an heir, great-prince Vasilii Ioannovich decided to wed a second time (to Elena Glinsky) and on 25 November 1525 he ordered Solomonia to be tonsured a nun. Forcibly monasticised with the name Sophia, Solomonia was sent under guard to the Suzdal’ Pokrov-Protection convent, where by ascetic deeds she banished from her heart worldly thoughts, and totally dedicated herself to God. Prince Kurbsky calls the blessed princess “a Nun Martyress”. In the manuscripts of the Saints she is termed as “the holy Righteous Princess Sophia the Monastic, for she did dwell at the Pokrov monastery convent, a wonderworker”. Under tsar Feodor Ioannovich they esteemed her as a saint. Tsaritsa Irina Feodorovna sent to Suzdal’, “to Great-Princess Solomonida, in other regards Sophia, a velvet veil with depiction of the Saviour and other saints”. Patriarch Joseph wrote to the Suzdal’ archbishop Serapion about the singing over Sophia of panikhidas and moliebens. The Nun Sophia reposed to God in the year 1542. In the descriptions by the Suzdal’ sacristan Ananii there occur several instances of miraculous healings at the grave of the Nun Sophia.

Martyr Marinus of Rome (283).
The Martyr Marinus suffered in Rome in about the year 283 (other sources suggest the years 217-218). Refusing to offer sacrifice to idols, Saint Marinus was beheaded after cruel tortures.