Titus 1:15-2:1-10
To the pure all things are pure, but to those who are defiled and unbelieving nothing is pure; but even their mind and conscience are defiled. They profess to know God, but in works they deny Him, being abominable, disobedient, and disqualified for every good work. But as for you, speak the things which are proper for sound doctrine: that the older men be sober, reverent, temperate, sound in faith, in love, in patience; the older women likewise, that they be reverent in behavior, not slanderers, not given to much wine, teachers of good things- that they admonish the young women to love their husbands, to love their children, to be discreet, chaste, homemakers, good, obedient to their own husbands, that the word of God may not be blasphemed. Likewise, exhort the young men to be sober-minded, in all things showing yourself to be a pattern of good works; in doctrine showing integrity, reverence, incorruptibility, sound speech that cannot be condemned, that one who is an opponent may be ashamed, having nothing evil to say of you. Exhort bondservants to be obedient to their own masters, to be well pleasing in all things, not answering back, not pilfering, but showing all good fidelity, that they may adorn the doctrine of God our Savior in all things.

Mark 9:33-41
Then He came to Capernaum. And when He was in the house He asked them, “What was it you disputed among yourselves on the road?” But they kept silent, for on the road they had disputed among themselves who would be the greatest. And He sat down, called the twelve, and said to them, “If anyone desires to be first, he shall be last of all and servant of all.” Then He took a little child and set him in the midst of them. And when He had taken him in His arms, He said to them, Whoever receives one of these little children in My name receives Me; and whoever receives Me, receives not Me but Him who sent Me. Now John answered Him, saying, “Teacher, we saw someone who does not follow us casting out demons in Your name, and we forbade him because he does not follow us.” But Jesus said, “Do not forbid him, for no one who works a miracle in My name can soon afterward speak evil of Me. For he who is not against us is on our side. For whoever gives you a cup of water to drink in My name, because you belong to Christ, assuredly, I say to you, he will by no means lose his reward. 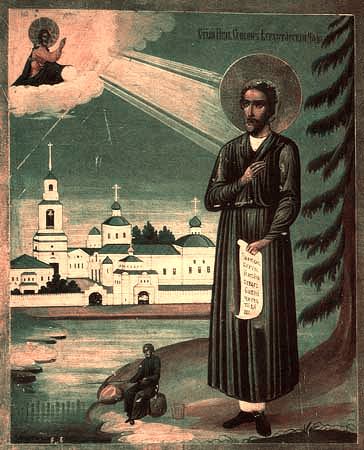 Righteous Simeon of Verkhotursk (+ 1642) was a nobleman, but he concealed his origin and led the life of a beggar. He walked through the villages and for free sewed half-coat and other over-clothes, primarily for the poor. While doing this he deliberately failed to sew something – either a glove, or a scarf, for which he endured abuse from his customers. The ascetic wandered much, but most often he lived at a churchyard of the village of Merkushinsk not far from the city of Verkhotur’ (Perm outskirts). Saint Simeon loved nature in the Urals, and joyfully contemplating its majestic beauty, he would raise up a thoughtful glance towards the Creator of the world. In such of his time as was free of toil, the saint loved to go afishing in the tranquility of solitude, since this reminded him of the disciples of Christ, whose work he continued, guiding the local people in the true faith. His conversations were that seed of grace, from which gradually grew the abundant fruits of the Spirit in the Urals and in Siberia, where the saint is especially reverenced.       Righteous Simeon of Verkhotursk died in 1642, when he was but 35 years of age. He was buried in the Merkushinsk graveyard by the church of the Archangel Michael.       On 12 September 1704, with the blessing of the Tobol’sk metropolitan Philothei, the holy relics of Righteous Simeon were transferred from the church of the Archistrategos Michael to the Verkhotursk monastery in the name of Saint Nicholas.       Righteous Simeon worked many a miracle after his death. He frequently appeared in a dream to the sick and healed them, and he brought to their senses those fallen into the disease of drunkenness. A peculiarity in the appearance of the saint was that with the healing of bodily infirmities he gave instruction and guidance for the soul.       The memory of Righteous Simeon of Verkhotursk is celebrated also on 12 September. 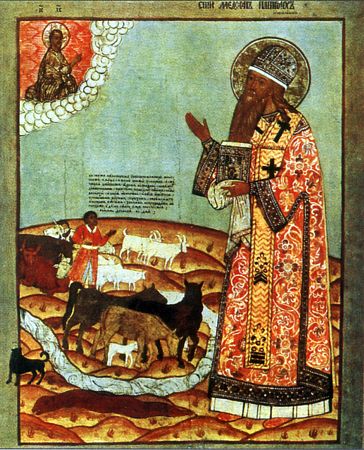 Sainted Modestos, Archbishop of Jerusalem, was born into a Christian family in Cappadocian Sebasteia (Asia Minor). From his youthful years he felt a strong attraction towards strict monastic life. Saint Modestos accepted monastic tonsure. Afterwards he became head of the monastery of Saint Theodosios the Great (founded in the IV Century) in Palestine. At this time (the year 614), military forces of the Persian emperor Chosroes fell upon Syria and Palestine, killing 90 thousand Christians and laying waste the Christian churches. The Jerusalem Patriarch Zakharias and a multitude of Christians together with the Cross of the Lord was taken into captivity. Saint Modestos was entrusted to temporarily govern the Jerusalem Church in the capacity of locum tenens of the patriarchal cathedra.       With the help of the Alexandria Patriarch John the Merciful (Comm. 12 November), Saint Modestos set about the restoring of devastated Christian holy places, among which was the Sepulchre of the Lord. He reverently gave burial to the remained of murdered monks from the monastery of Saint Sava the Sanctified. After 14 years, Patriarch Zakharias returned from captivity with the Cross of the Lord, and after his death Saint Modestos became Patriarch of Jerusalem. Saint Modestos died at age 97 in the year 634.

Venerable Sebastian , abbot of Poshekhonye Monastery (Vologda) (1500).
The Monk Sevastian of Sokhotsk, Poshekhonsk, founded a monastery in honour of the Transfiguration of the Lord, located at the River Sokhota, 90 versts from the city of Romanov (now Tutaev) in the Yaroslavsk district. The monks of the monastery themselves cultivated the soil and ate through the work of their own hands. The founder of the monastery taught the ascetics this by his own example and guidance. The Monk Sevastian reposed in about the year 1500.       The Transfiguration monastery on the River Sokhota was later annexed to the Cherepovetsk Ascension monastery, and in 1764 closed down. In the mid XIX Century over the relics of the Monk Sevastian was built a stone church. Commemoration of the saint is likewise made on 26 February.

Venerable Florus , bishop of Amisus (7th c.).
The Monk Phloros, Bishop of Ameia, was the son of the Christians Phloros and Euthymia, who provided him a fine education. He entered courtly service for the Byzantine emperor and was elevated to the dignity of patrician; he was also married and had children. After his wife and children died from smallpox, he left the world and withdrew to the outskirts of Constantinople, where he led a solitary and pious life. Later on he was chosen bishop of Ameia (in Asia Minor). Saint Phloros wisely guided his flock and died peacefully at the beginning of the VII Century.

Venerable Michael the Confessor at Constantinople (845).
The Monk Michael the Confessor was born at Jerusalem into a family of zealous Christians and at an early age devoted himself to monastic life. After the death of his father, his mother and sisters went off to a monastery, and the Monk Michael was ordained to the dignity of presbyter. He was famed as a strong preacher, and therefore the Jerusalem Patriarch Thomas I took him under wing and advanced him in the calling of “synkellos” (dealing in matters of church governance). At this time there reigned the Iconoclast emperor Leo the Armenian (813-820). The patriarch dispatched off to him the Monk Michael, together with the holy brothers Saints Theodore (Comm. 27 December) and Theophanes (Comm. 11 October), with the hope that they might persuade the emperor to cease his persecution against the Orthodox. The emperor subjected Saint Michael to beatings and sent him off into exile. Later having returned from exile, the monk again suffered for the veneration of holy icons under the emperor Theophilos (829-842). The companions of Saint Michael, Saints Theodore and Theophanes, were subjected to horrible torments: upon their faces was put red-hot brandings with an inscription slandering them. They received the churchly title “Written-Upon” (“Nachertannykh”). Again condemned, Saint Michael was sent with his disciple Job to the Pabeida monastery. After the death of Theophilos, the empress Theodora (842-855) restored the veneration of holy icons, and ordered the return of Christians banished by the Iconoclasts. She made the offer that Saint Michael might occupy the patriarchal throne in place of the deposed iconoclast, Grammatikos. But the holy martyr declined this. Thus upon the patriarchal throne entered Saint Methodios.       Saint Michael the Confessor to the end of his days toiled in the position of “synkellos”. He died peacefully in about the year 845.

Hieromartyr Zaccheus the Deacon and St. Alpheus the Reader of Caesarea (Greek).

Martyr Sebastian & Companions, Tone IV
In their sufferings, O Lord,
Thy martyrs received imperishable crowns from
Thee our God;
for, possessed of Thy might,
they set at nought the tormentors
and crushed the feeble audacity of the demons.
By their supplications save
Thou our souls.

Kontakion of the martyrs, in Tone I
A hand-wrought image ye would not worship, O thrice-blessed ones; but armed by the Indepictable Essence, ye were glorified in your ordeal by fire. Standing in the midst of the irresistible flame, ye called upon God: Speed Thou, O Compassionate One, and hasten, since Thou art merciful, to come unto our aid, for Thou art able, if it be Thy will.