James 2:1-13
My brethren, do not hold the faith of our Lord Jesus Christ, the Lord of glory, with partiality. For if there should come into your assembly a man with gold rings, in fine apparel, and there should also come in a poor man in filthy clothes, and you pay attention to the one wearing the fine clothes and say to him, “You sit here in a good place,” and say to the poor man, “You stand there,” or, “Sit here at my footstool,” have you not shown partiality among yourselves, and become judges with evil thoughts? Listen, my beloved brethren: Has God not chosen the poor of this world to be rich in faith and heirs of the kingdom which He promised to those who love Him? But you have dishonored the poor man. Do not the rich oppress you and drag you into the courts? Do they not blaspheme that noble name by which you are called? If you really fulfill the royal law according to the Scripture, “You shall love your neighbor as yourself,” you do well; but if you show partiality, you commit sin, and are convicted by the law as transgressors. For whoever shall keep the whole law, and yet stumble in one point, he is guilty of all. For He who said, “Do not commit adultery,” also said, “Do not murder.” Now if you do not commit adultery, but you do murder, you have become a transgressor of the law. So speak and so do as those who will be judged by the law of liberty. For judgment is without mercy to the one who has shown no mercy. Mercy triumphs over judgment.

Mark 10:23-32
Then Jesus looked around and said to His disciples, “How hard it is for those who have riches to enter the kingdom of God!” And the disciples were astonished at His words. But Jesus answered again and said to them, “Children, how hard it is for those who trust in riches to enter the kingdom of God! It is easier for a camel to go through the eye of a needle than for a rich man to enter the kingdom of God. And they were greatly astonished, saying among themselves, “Who then can be saved?” But Jesus looked at them and said, “With men it is impossible, but not with God; for with God all things are possible.” Then Peter began to say to Him, “See, we have left all and followed You.” So Jesus answered and said, “Assuredly, I say to you, there is no one who has left house or brothers or sisters or father or mother or wife or children or lands, for My sake and the gospel’s, who shall not receive a hundredfold now in this time-houses and brothers and sisters and mothers and children and lands, with persecutions-and in the age to come, eternal life. But many who are first will be last, and the last first. Now they were on the road, going up to Jerusalem, and Jesus was going before them; and they were amazed. And as they followed they were afraid. Then He took the twelve aside again and began to tell them the things that would happen to Him: 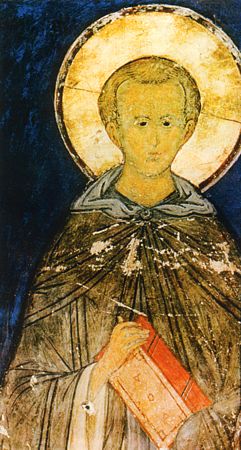 The Monk John the Tent-Dweller was the son of rich and illustrious parents living in Constantinople during the V Century, and he received a fine education. He loved to read spiritual books, and having perceived the vanity of secular life, he preferred “rather than the broad path one that was narrow and infirm and extremely rigorous”. Having persuaded his parents to give him a Gospel, he set out secretly to Bithynia. At the monastery “Unceasing Vigilance” he received monastic tonsure. The young monk began to asceticise with zeal, astonishing his brethren with unceasing prayer, humble obedience, strict abstinence and perseverance at work.       After six years he began to undergo temptations: thoughts about his parents, about their love and fondness, about their sorrow – all this began to overtake the young ascetic.       Saint John disclosed his situation to the hegumen and he asked to be released from the monastery, and he besought the brethren not to forget him in their prayers, hoping that by their prayers he would with the help of God, both see his parents and overcome the snares of the devil. The hegumen gave him his blessing.       Saint John returned to Constantinople in the clothes of a beggar, and known to no one. He settled at the gates of his parental home. The parents sent him food from their table, for the sake of Christ. For three years, oppressed and insulted, he lived in a tent (hut), enduring cold and frost, unceasingly conversing with the Lord and the holy Angels. Always with him was the Gospel, given him by his parents, and from which he unceasingly gathered out sayings of life eternal. Before his death the Lord appeared in a vision to the monk, revealing that the end of his sorrows was approaching and that after three days he would be taken up into the Heavenly Kingdom.       Only then did the saint show his parents the Gospel, which they had given him shortly before he had left his parental home. The parents recognised their son. With tears of joy they hugged him simultaneously with tears of sorrow, in that he had endured privation for so long at the very gates of his parental home. Saint John gave final instructions to his parents to bury him on the spot where stood his tent, and to put in the grave the beggar’s rags that he wore during life.       The saint died in the mid V Century, when he was not yet 25 years of age. On the place of his burial the parents built a church to God and alongside it an house of hospitality for strangers. In the XII Century the head of the saint was taken by Crusaders to Besacon (in France), and the other relics of the saint were taken to Rome. 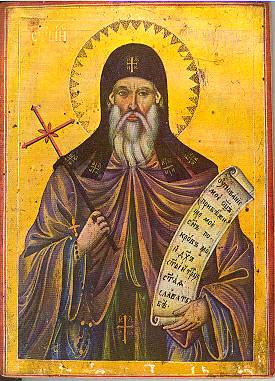 The Monk Prokhor of Pshinsk pursued asceticism in the Bransk wilderness at the River Pshina, and he founded there a monastery. He is reknown as one of the most strict ascetics of monastic life. He died at the end of the X Century. From the relics of the monk occurred miracles. According to the Serbian Chronicles, the pious king Miliutin (1276-1320) built a church in the name of the Monk Prokhor. 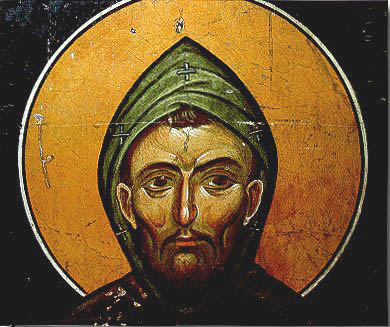 The Monk Gabriel, founder of the Lesnovsk monastery near the city of Kratov, having received after the death of his parents a large inheritance, rejected marriage and went out onto the Lesnovsk mountain and became a monk. And there he built a church in the name of the Archangel Michael, and having gathered many monks and established for it an hegumen, he left to the monastery all his inheritance. He then hid himself away in a mine cave, where he asceticised for a period of thirty years, conquering demonic temptations by prayer and fasting. He then returned to the Lesnovsk monastery and there peacefully reposed (XI). After thirty years his relics were uncovered, and healings worked through them. A long while later they were transferred to Ternovo (Tirnova) in Bulgaria. 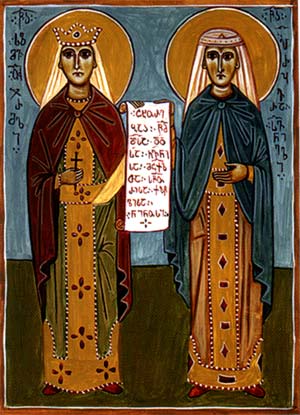 Saints Salome of Ujarma and Perozhavra of Sivnia were the helpers and closest companions of St. Nino, Enlightener of Georgia. St. Nino herself had converted them to the Christian Faith.       Salome was the wife of Revi, the son of King Mirian, and Perozhavra was married to the ruler of the Kartli region. Both women were queens, but they succeeded in serving St. Nino while retaining their imperial roles. St. Nino taught them to pray, and the0women fasted regularly and performed good works. As a result of their influential social status, the two queens were able to help St. Nino tremendously in spreading the Christian Faith.       After the conversion of Kartli, with inspiration from St. Nino and by the order of King Mirian, St. Salome erected a cross in Ujarma in the Kakheti region.       When St. Nino fell ill in the village of Bodbe, the queens Salome and Perozhavra stood by her bed and wept bitterly at having to part with their beloved teacher and healer. They entreated St. Nino, who was finishing her last hours on this earth, saying, Tell us, our Queen, how did you come to our country to free our souls, and where were you raised? Tell us how to continue your good works. You who have delivered us from bondage to the enemy, tell us, what shall we do?       From the information that St. Nino then related to them, Sts. Salome and Perozhavra wrote The Life of St. Nino, Enlightener of Georgia. The Apostolic Orthodox Church of Georgia commemorates them on January 15, the day following the commemoration of St. Nino.

Monk-martyr Pansophius of Alexandria (249-251).
The MonkMartyr Pansophias, was a son of the Alexandrian proconsul Nilos. After the death of his father he distributed his inheritance to the poor and settled in the wilderness, where he asceticised for 27 years. During the time of the persecution by Decius (249-251) the Monk Pansophias was brought to trial to the prefect of Alexandria. The monk boldly confessed his faith in Christ and denounced pagan errors, for which he was fiercely beaten with canes, and he died from these beatings, receiving therein a martyr’s crown (249-251).

Venerable Barlaam of Keret Lake near the White Sea (16th c.).
The Monk Varlaam of Keretsk served during the XVI Century as a priest in the Keretsk area of the Kol’sk peninsula on the White Sea. He was venerated as the patron of White Sea industrial workers and sea-farers. He was glorified by posthumous miracles, saving the drowning.

Ss. Paul of Thebes & John the Hut-Dweller, Troparion, Tone IV
O God of our fathers,
deal with us ever according to Thy meekness.
Deprive
us not of Thy mercy,
but through their supplications
direct our life in
peace.

Kontakion of the Venerable Paul, Tone III, “Today the Virgin”
Assembling today let us praise in hymns the never-failing lamp of the noetic
Sun;
for thou didst shine forth upon those in the darkness of ignorance,

leading all to the divine heights,
O venerable Paul, adornment of the
Thebans,
steadfast foundation of the fathers and the venerable.