Colossians 1:3-6
We give thanks to the God and Father of our Lord Jesus Christ, praying always for you, since we heard of your faith in Christ Jesus and of your love for all the saints; because of the hope which is laid up for you in heaven, of which you heard before in the word of the truth of the gospel, which has come to you, as it has also in all the world, and is bringing forth fruit, as it is also among you since the day you heard and knew the grace of God in truth;

Luke 16:10-15
He who is faithful in what is least is faithful also in much; and he who is unjust in what is least is unjust also in much. Therefore if you have not been faithful in the unrighteous mammon, who will commit to your trust the true riches? And if you have not been faithful in what is another man’s, who will give you what is your own? No servant can serve two masters; for either he will hate the one and love the other, or else he will be loyal to the one and despise the other. You cannot serve God and mammon. Now the Pharisees, who were lovers of money, also heard all these things, and they derided Him. And He said to them, “You are those who justify yourselves before men, but God knows your hearts. For what is highly esteemed among men is an abomination in the sight of God.

Acts 12:1-11 (Apostle)
Now about that time Herod the king stretched out his hand to harass some from the church. Then he killed James the brother of John with the sword. And because he saw that it pleased the Jews, he proceeded further to seize Peter also. Now it was during the Days of Unleavened Bread. So when he had arrested him, he put him in prison, and delivered him to four squads of soldiers to keep him, intending to bring him before the people after Passover. Peter was therefore kept in prison, but constant prayer was offered to God for him by the church. And when Herod was about to bring him out, that night Peter was sleeping, bound with two chains between two soldiers; and the guards before the door were keeping the prison. Now behold, an angel of the Lord stood by him, and a light shone in the prison; and he struck Peter on the side and raised him up, saying, “Arise quickly!” And his chains fell off his hands. Then the angel said to him, “Gird yourself and tie on your sandals”; and so he did. And he said to him, “Put on your garment and follow me.” So he went out and followed him, and did not know that what was done by the angel was real, but thought he was seeing a vision. When they were past the first and the second guard posts, they came to the iron gate that leads to the city, which opened to them of its own accord; and they went out and went down one street, and immediately the angel departed from him. And when Peter had come to himself, he said, “Now I know for certain that the Lord has sent His angel, and has delivered me from the hand of Herod and from all the expectation of the Jewish people.”

Veneration of the Precious Chains of the Holy and All-glorious Apostle Peter .

The Veneration of the Venerable Shackles of the Holy and All-Praiseworthy Apostle Peter: On the orders of Herod Agrippa, in about the year 42 the Apostle Peter was thrown into prison for preaching about Christ the Saviour. In prison he was held secure by two iron chains. By night, on the eve of his trial, an Angel of the Lord removed these chains from the Apostle Peter and miraculously led him out from the prison (Acts 12: 1-11). Christians who learned of the miracle took the chains and kept them as precious keepsakes. Those afflicted with illness and approaching them with faith received healing. The Chains of the holy Apostle Peter were kept at Jerusalem until the time of Patriarch Juvenalios, who presented them to Eudocia, spouse of the emperor Theodosius the Younger, and she in turn transferred them from Jerusalem to Constantinople in either the year 437 or 439. Eudocia sent one Chain to Rome to her daughter Eudoxia, who built a church in the name of the Apostle Peter and put within it the Chain. At Rome were also other Chains, in which the Apostle Peter found himself before his death under the emperor Nero.       On 16 January the Chains of the Apostle Peter are brought out for veneration by the people. 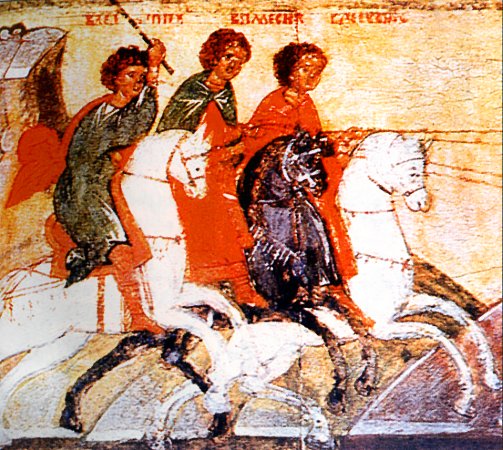 The Holy Martyrs Speusippos, Eleusippos, Meleusippos, and their grandmother Leonilla together with Neonos, Turbonos and Jovilla suffered in Galilee (by another account, in Cappadocia) in the Second Century, during the time of the persecution under Marcus Aurelius (161-180). Leonilla received Baptism in her declining years from one of the disciples of Saint Polycarp, Bishop of Smyrna, and she afterwards converted to Christ her three grandchildren. The brothers, out of their enthusiasm for the Lord, pulled down idols and reproached the pagans for their folly. The torturers, leading Leonilla to the place of execution, ordered her to say to her grandchildren that they should renounce Christ, but she in passing by them praised them for their bravery and their firm confession of faith. Then the martyrs were thrown into a fire, but it did not harm them. After the torturing and death of her grandchildren, Saint Leonilla was beheaded by the sword. Together with her suffered also Saint Jovilla. She beheld the unflinching faith of the holy martyrs and confessed herself a Christian, leaving behind an husband and young son. The torturers, having hung her up by the hair, lacerated her body and beheaded her. Saint Neonos beheld the exploits of the holy brothers, and having recorded their sufferings, gave his manuscript to Turbonos, and he openly confessed himself a Christian, for which he was fiercely beaten and died from his beating. Saint Turbonos, having copied out the exploits of the passion-bearers, also ended his life by martyrdom. These martyrs are particularly revered in Spain, where many churches are dedicated to them. The relics of the holy martyrs were given by the Greek emperor Zenon to France, in the city of Langre.

Blessed Maximus of Totma (Vologda), fool-for-Christ (1650).
Righteous Maxim, Priest of Tot’ma, was for a certain time priest in the city of Tot’ma in Vologda diocese. Over the course of forty years he made the harsh exploit of fool-for-Christ, constantly in fasting and in prayer. Blessed Maxim died in extreme old age on 16 January 1650 and was buried at the Resurrection church, in which he served. The local veneration of the saint began in 1715, in connection with numerous miracles occurring at his grave.

Martyr Danax the Reader in Macedonia (2nd c.).
The Holy Martyr Danaktos lived during the II Century and served as reader at a church in the locale of Auleneia in Macedonia. During the time of an incursion by non‑believers the saint took the church vessels and intended to hide them, but he was seized by soldiers. Refusing to worship an idol, he was beheaded by the sword.

New Hieromartyr Damascene of Hilandar on Mt. Athos and Gabrovo (Bulgaria) (1771) (Greek).
The PriestMartyr Damaskin the New was born in the village of Gabrovo of Tirnovo diocese. As an adult, he left his fatherland and withdrew to Athos. He accepted monasticism there at the Khilendaria monastery, at which he later became hegumen. On needs of the monastery Saint Damaskin journeyed to Bulgaria, to the settlement of Sistovo. In fulfilling the entrusted task, he requested of Turks a repayment of debt, but not only did the Turks not repay the debt, they seized from the saint everything he had. Afterwards they charged him with abducting a woman (they brought her secretly to the gaol to him). Despite the defense of the ruler of the settlement, the Turks took Saint Damaskin to the gallows and gave him a choice to accept Mussulmanism. Not receiving agreement from the saint, the Turks hung him on 16 January 1771. The wrath of God did not hesitate to overtake the evil-doers, for in crossing the Danube River, the executioners drowned.

St. Honoratus the Archbishop of Arles and Founder of Lerins Monastery (429).

St. Honoratus, archbishop of Aries and founder of Lerins Monastery (429).

The Veneration of the Precious Chains of the Holy Pre-eminent Apostle
Peter, Troparion, Tone IV
Without leaving Rome thou art come to us in the precious chains which thou
didst bear, O first-enthroned of the apostles; and, bowing down before them with
faith we pray: through thy supplications unto God grant us great mercy!

Kontakion, Tone II, “Seeking the highest”
Christ the Rock most splendidly glorifieth the rock of faith, the
first-enthroned of His disciples; for He summoneth all to celebrate the wonders
of thy precious chains, O Peter, and granteth forgiveness of offenses.