Acts 15:35-41
Paul and Barnabas also remained in Antioch, teaching and preaching the word of the Lord, with many others also. Then after some days Paul said to Barnabas, “Let us now go back and visit our brethren in every city where we have preached the word of the Lord, and see how they are doing.” Now Barnabas was determined to take with them John called Mark. But Paul insisted that they should not take with them the one who had departed from them in Pamphylia, and had not gone with them to the work. Then the contention became so sharp that they parted from one another. And so Barnabas took Mark and sailed to Cyprus; but Paul chose Silas and departed, being commended by the brethren to the grace of God. And he went through Syria and Cilicia, strengthening the churches.

John 10:27-38
My sheep hear My voice, and I know them, and they follow Me. And I give them eternal life, and they shall never perish; neither shall anyone snatch them out of My hand. My Father, who has given them to Me, is greater than all; and no one is able to snatch them out of My Father’s hand. I and My Father are one. Then the Jews took up stones again to stone Him. Jesus answered them, “Many good works I have shown you from My Father. For which of those works do you stone Me?” The Jews answered Him, saying, “For a good work we do not stone You, but for blasphemy, and because You, being a Man, make Yourself God.” Jesus answered them, “Is it not written in your law, ‘I said, “You are gods” ‘? If He called them gods, to whom the word of God came (and the Scripture cannot be broken), do you say of Him whom the Father sanctified and sent into the world, ‘You are blaspheming,’ because I said, ‘I am the Son of God’? If I do not do the works of My Father, do not believe Me; but if I do, though you do not believe Me, believe the works, that you may know and believe that the Father is in Me, and I in Him.

The Monk Isaiah was among the other Kievo-Pechersk Saints that asceticised during the XI and beginning XII Centuries. His basic exploit in life was his quietness and his unflagging toil, for which he is named a “lover-of-work”. The holy ascetic died in the year 1115, and his relics are in the Nearer Caves of the Kievo-Pechersk Lavra. The celebration of the Monk Isaiah is made on 15 May, 28 September and on the 2nd Sunday of Great Lent. 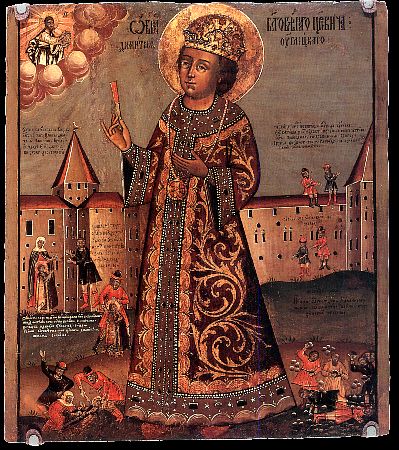 He was murdered at the age of eight by the evil designs of Boris Godunov, in the town of Uglich. After his death he appeared to a monk and accurately foretold Boris Godunov’s death. Countless miracles were worked at the grave of the Tsarevich. When his tomb was opened fifteen years after his death, his relics were found whole and incorrupt, and were solemnly buried in the Church of the Archangel Michael in Moscow.   The circumstances of Boris Godunov’s death are worth telling. He first tried to kill the Tsarevich using the strongest poison, but it had no effect. He then had the child publicly beheaded. Not long afterwards a ‘false Dimitri’ arose, claiming to be the Tsarevich, and rallied a great army against Godunov. Godunov was driven to such a desperate position that he took his own life by poison, the ‘remedy’ he had intended for the true Dimitri.

Venerable Pachomius , abbot and Silvanus of Nerekhta (1384).
The Monk Pakhomii of Nerekhtsk, in the world Yakov, was born into the family of a priest at Vladimir on the Klyaz’ma. At age 7 he was sent for schooling, since from childhood he well knew the Holy Scriptures. Finding burdensome the bustle of the perishing world, he accepted tonsure at the Vladimir Nativity monastery and without murmur at the monastery he progressed through the various obediences. Yearning for solitary wilderness life, the ascetic secretly left the monastery and withdrew to the outskirts of Nerekhta. Here, at the River Gridenka, he found a suitable place for monastic life – a raised semi-island in the deep forest. The monk recoursed to the people about Nerekhta to establish and build a monastery in the vicinity of Sypanovo, on the Kostroma frontier. The Nerekhta people happily consented and took a significant part in the construction of the monastery. The Monk Pakhomii wrote an icon in the image of the Holy Trinity, and with the singing of a molieben he carried it to that place, whereat he was to erect the church in the Name of the Holy Trinity. Finishing with the construction of the temple, Saint Pakhomii concerned himself about the organising of the new monastery, where gradually monks were settling. At the newly-formed monastery the monks had to cultivate the land themselves and feed themselves by the toil of their own hands, a matter in which the saint was first to set the brethren an example. The monk died in the year 1384, well up in age, and he was buried in the Trinity church built by him. One of his disciples, Irinarkh, wrote an icon of the saint, and later there was built a crypt for his holy relics. The primary days of memory of the Monk Pakhomii are on 15 May, the day of “tezoimenstvo” (“name-in-common”), and on 23 March – the day of his repose.

Venerable Euphrosynus (Eleazar), abbot, wonderworker of Pskov (1481), and his disciple St. Serapion (1480).
He was born in (what is now) Lithuania, but entered monastic life in the Pskov district. His spiritual father was St Euphrosynus (May 15), under whose care he lived for more than fifty-five years. He became known for his exceptional humility and asceticism. He tried never to be idle, giving any free moment to prayer and reading of Scripture. He emphasized the importance of the common prayer of the Church, saying that reciting the entire Twelve Psalm rule in one’s cell was not worth one Kyrie Eleison chanted by the brethren assembled together in church. His knowledge of Lithuanian and Finnish allowed him to strengthen the faith among the peoples of those lands. When he died, at the age of ninety, his clothing was so threadbare that no one wanted it. Soon after his repose, a blind man recovered his sight at St Serapion’s tomb, which has been the site of many miracles ever since.

Venerable Achilles , bishop of Larissa (330).
Sainted Achilles, Bishop of Lariseia, lived during the IV Century, during the reign of Equal-to-the-Apostles Constantine the Great. Glorified by his sanctity of life and erudition, he was made bishop of the city of Lariseia in Thessaly. Saint Achilles was a participant in the First OEcumenical Council, where he boldly denounced the heretic Arius. In his city he zealously cultivated Christianity, destroying idolous pagan-temples, and he built and adorned churches. Saint Achilles had the gift of healing sickness, especially demonic-possession, and he worked many miracles. The saint died peacefully in about the year 330. His relics since the year 978 are in Bulgaria at the city of Prespa (at present – the village of Akhila, called such in honour of the deceased saint).

Finding of the relics of Venerable Arsenius, abbot of Konevits (1991).

Venerable Pachomius, abbot of Nerekhta (1384), and St. Silvanus, of Nerekhta.

St. Pachomius the Great, Troparion, in Tone VIII
With the streams of thy tears thou didst irrigate the barren desert,
and
with sighs from the depths of thy soul thou didst render thy labors fruitful an
hun­dredfold.
Thou wast a beacon for the whole world, radiating miracles.
O
our father Pachomius, entreat Christ God that our souls be saved.