Matthew 10:16-22
Behold, I send you out as sheep in the midst of wolves. Therefore be wise as serpents and harmless as doves. But beware of men, for they will deliver you up to councils and scourge you in their synagogues. You will be brought before governors and kings for My sake, as a testimony to them and to the Gentiles. But when they deliver you up, do not worry about how or what you should speak. For it will be given to you in that hour what you should speak; for it is not you who speak, but the Spirit of your Father who speaks in you. Now brother will deliver up brother to death, and a father his child; and children will rise up against parents and cause them to be put to death. And you will be hated by all for My name’s sake. But he who endures to the end will be saved. 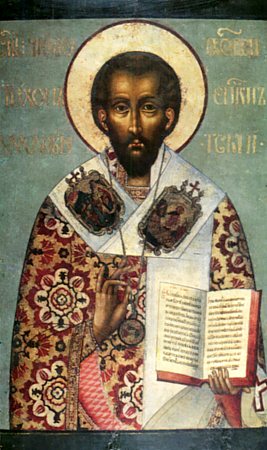 Sainted Tykhon, Bishop of Amaphuntum, was born in the city Amaphuntum on the island of Cyprus. His parents raised their son in Christian piety, and taught him the reading of Sacred books. There is an account extant, that the gift of wonderworking appeared in Saint Tykhon at a still quite youthful age.       His father was the owner of a bread bakery and he sent his son to distribute bread. The holy lad gave bread free to the needy. Learning about this, his father became angry, but the son answered, that he had read in the holy books, that “in giving to God one receiveth back an hundredfold”. “I too, – said the youth, – gave to God the bread which was taken” and he persuaded his father to go to where the grain was stored. With astonishment the father saw that the granary which formerly was empty, was now filled to overflowing with wheat. From that time the father did not hinder his son from distributing bread to the needy.       A certain gardener brought from the vineyard the dried prunings of vines. Saint Tykhon gathered them, planted them in his garden and besought the Lord, that these branches might take root and yield salubrious fruit for the health of people. The Lord did so through the faith of the holy youth. The branches took root, and their fruit had a particular and very pleasant taste and was used during the lifetime of the saint and after his death for the wine in making the mystery of the Holy Eucharist.       They accepted the pious youth into the church clergy, made him a reader, and afterwards the bishop of Amaphuntum Memnon ordained him to the dignity of deacon. After the death of Bishop Memnon, Saint Tykhon by universal agreement was chosen as bishop of Amaphuntum. The ordination was headed by Sainted Epiphanios, Bishop of Cyprus (+ 403, Comm. 12 May).       Saint Tykhon laboured zealously for the eradication of the remnants of paganism on Cyprus – he destroyed an idolatrous temple and spread the Christian faith. The sainted-bishop was generous, his doors were open to all, and with love he listened to and fulfilled the request of each person who came to him. Fearing neither threats nor tortures, he firmly and fearlessly confessed his faith before pagans.       In the service to Sainted Tykhon it is pointed out, that he foresaw the time of his death, which occurred in the year 425.       The name of Sainted Tykhon of Amaphuntum was accorded great honour in Russia. In honour of the saint, temples were constructed at Moscow, at Nizhni Novgorod, at Kazan and other cities. But the saint was particularly venerated in Voronezh diocese, where there were three archpastors in succession sharing the name with the Sainted-bishop of Amaphuntum: Sainted Tikhon I (Sokolov) (+ 1783, Comm. 13 August), Tikhon II (Yakubovsky, until 1785) and Tikhon III (Malinin, until 1788). 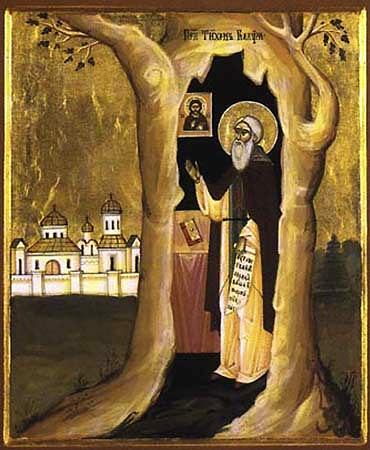 The Monk Tikhon of Medynsk and Kaluzh, in his youth accepted monastic vows at one of the Moscow monasteries, , but through his love for solitude he settled at an isolated spot near Maloyaroslavl’. He pursued asceticism in a deep dense forest, on the bank of the River Vepreika, in the hollow of an aged giant oak. Once during the time of an hunt prince Vasilii Yaroslavich (grandson of Vladimir the Brave), having come upon the Monk Tikhon, angrily ordered him to immediately quit his domain, and made bold to raise his lash against the monk. The hand of the prince grew immediately numb. Taken aback by such punishment, the prince repented of his conduct and with humility asked forgiveness. He received healing through the prayer of Saint Tikhon. The prince entreated the monk to remain always in his domain and build there a monastery for monks, promising to provide it all the necessities. The Monk Tikhon built a monastery in honour of the Uspenie (Dormition or Repose) of the MostHoly Mother of God, which he headed. He guided the monastery until extreme old age, and he died in the year 1492, having accepted the great monastic-schema. The body of the Monk Tikhon was buried at the cathedral church of the monastery founded by him. The celebration of the Monk Tikhon was established at the Council of 1584.       Among the disciples of the Monk Tikhon, particularly distinguished by his sanctity of life was the Monk Nikiphor of Kaluzh. It is assumed, that he was the successor of the Monk Tikhon in guiding the monastery. The Monk Nikiphor is depicted on icons together with other Kaluzh saints: the Monk Paphnutii of Borovsk (Comm. 1 May), the Monk Tikhon of Kaluzh and Blessed Lavrentii of Kaluzh (Comm. 10 August). 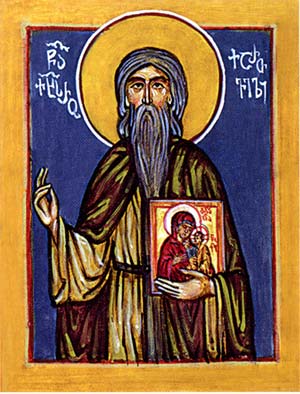 Venerable Tikhon of Lukhov (1503).
The Monk Tikhon of Lukhovsk, and Kostroma (in the world Timofei), was born within the bounds of the Lithuanian princedom and was in military service there. In the year 1482, not wanting to accept Uniatism, he went from Lithuania to Russia. The saint gave away everything that he had, accepted monastic orders with the name Tikhon and settled in Kostroma diocese in the Lukhovsk region. The city of Lukh was at that time given to prince Feodor Bel’sky, together with whom the Monk Tikhon had come from Lithuania. On the banks of the boundary of the Kopitovka the Monk Tikhon made his cell. When two monks, Photii and Gerasim, came to him in the wilderness, the monk because of them moved a distance of three versts from the Koptovka to a more satisfactory location. The monks earned their living by the work of their hands. The Monk Tikhon copied books with skill, and was a fine lathe turner. Out of humility he did not become a priest. The Monk Tikhon died on 16 June 1503, in such poverty, that his disciples did not know how they would bury him. But to their comfort the archbishop of Suzdal’ sent a monastic burial shroud, in which to consign him to the earth. Soon after his death at the place of his labours there arose a monastery in honour of Sainted Nicholas the Wonderworker.       In 1569 at the grave of the Monk Tikhon there began healings of the sick, and his relics were found to be undecayed. But the hegumen Konstantin, who brought the relics above ground, was struck blind; having recovered his eyesight, he concealed the relics of the Monk Tikhon back into the ground. From this time began the veneration of the Monk Tikhon. His life with 70 posthumous miracles that were recorded was compiled in the year 1649.

Martyrs Tigrius and Eutropius of Constantinople (404).
The Priest-martyr Tigrias the Presbyter and the Martyr Eutropios the Reader were contemporaries of Sainted John Chrysostom (+ 407, Comm. 13 November) and were among his clergy. The holy Presbyter Tigrias was a mild and kindly pastor, Saint Eutropios was distinguished for his purity of life and prudence. When Saint John Chrysostom was banished from Constantinople in 404, the holy Tigrias and the reader Eutropios were arrested as his partisans and accused in the arson of churches and buildings, belonging to the opponents of Saint John Chrysostom. Saint Tigrias was put to torture, beaten with leather and banished to Mesopotamia, where he was imprisoned and died. Saint Eutropios they flogged, suspended, struck at him with iron and threw him in prison. When the torments were repeated, he died. His body, thrown for devouring by dogs, was taken by night and buried by Christians. At the time of burial was heard Angelic singing.

Five Martyrs of Nicomedia (Greek).
On this day also is celebrated the memory of 5 Nikomedian and 40 Roman Martyrs. The time of their suffering is unknown.

Venerable Moses of Optina, founder of the Optina Skete (1862).

St. Mark the Just of Apollonias, nephew of the Apostle Barnabas.

Holy Hieromartyr & Wonderworker Tychon of Amathus, Troparion, in Tone I
A desert dweller, an angel in the flesh,
and a wonderworker wast thou shown
to be,
O our God-bearing father Tychon,
for having acquired heavenly
gifts through fasting, vigilance, and prayer,
thou dost heal the infirm,
and
the souls of those who have recourse to thee with faith.
Glory to Him Who hath
given thee strength!
Glory to Him Who hath crowned thee!
Glory to Him Who
worketh healings for all through thee!