John 10:9-16 (Matins Gospel)
I am the door. If anyone enters by Me, he will be saved, and will go in and out and find pasture. The thief does not come except to steal, and to kill, and to destroy. I have come that they may have life, and that they may have it more abundantly. I am the good shepherd. The good shepherd gives His life for the sheep. But a hireling, he who is not the shepherd, one who does not own the sheep, sees the wolf coming and leaves the sheep and flees; and the wolf catches the sheep and scatters them. The hireling flees because he is a hireling and does not care about the sheep. I am the good shepherd; and I know My sheep, and am known by My own. As the Father knows Me, even so I know the Father; and I lay down My life for the sheep.

Galatians 1:11-19 (Equal-to-the-Apostles)
But I make known to you, brethren, that the gospel which was preached by me is not according to man. For I neither received it from man, nor was I taught it, but it came through the revelation of Jesus Christ. For you have heard of my former conduct in Judaism, how I persecuted the church of God beyond measure and tried to destroy it. And I advanced in Judaism beyond many of my contemporaries in my own nation, being more exceedingly zealous for the traditions of my fathers. But when it pleased God, who separated me from my mother’s womb and called me through His grace, to reveal His Son in me, that I might preach Him among the Gentiles, I did not immediately confer with flesh and blood, nor did I go up to Jerusalem to those who were apostles before me; but I went to Arabia, and returned again to Damascus. Then after three years I went up to Jerusalem to see Peter, and remained with him fifteen days. But I saw none of the other apostles except James, the Lord’s brother.

John 10:1-9 (Equal-to-the-Apostles)
Most assuredly, I say to you, he who does not enter the sheepfold by the door, but climbs up some other way, the same is a thief and a robber. But he who enters by the door is the shepherd of the sheep. To him the doorkeeper opens, and the sheep hear his voice; and he calls his own sheep by name and leads them out. And when he brings out his own sheep, he goes before them; and the sheep follow him, for they know his voice. Yet they will by no means follow a stranger, but will flee from him, for they do not know the voice of strangers. Jesus used this illustration, but they did not understand the things which He spoke to them. Then Jesus said to them again, Most assuredly, I say to you, I am the door of the sheep. All who ever came before Me are thieves and robbers, but the sheep did not hear them. I am the door. If anyone enters by Me, he will be saved, and will go in and out and find pasture.

Martyrs Cyricus (Quiricus) and his mother Julitta of Tarsus (305). 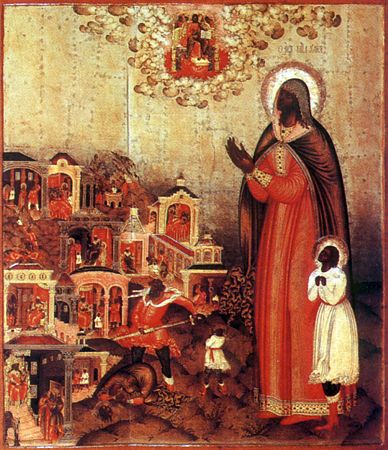 The Holy Martyrs Kyrikos and Julitta lived in Asia Minor in the city of Iconium in the Likaoneia region. Saint Julitta was descended from an illustrious family and was a Christian. Widowed early on, she raised her three year old son Kyrikos. During the time of the persecution made against Christians by the emperor Diocletian (284-305), Saint Julitta with her son and two trustworthy servants departed the city, leaving behind her home and property and servants.       Under the guise of being impoverished she his out first at Seleucia, and then at Tarsis. And it was there in about the year 305 that she was recognised, arrested and brought to trial before the governor named Alexander. Strengthened by the Lord, she fearlessly gave answer to the questions of the judge and she firmly confessed her faith in Christ. The governor gave orders to beat the saint with canes. During the time of torment Saint Julitta kept repeating: “I am a Christian and will not offer sacrifice to demons”.       The little boy Kyrikos cried, seeing his mother being tortured, and wanted to go to her. The governor Alexander tried to hug him, but the boy broke free and shouted: “Let me go to my mother, I am a Christian”. The governor flung the boy from the high rostrum onto the stone steps, and the boy tumbled downwards striking the sharp edges, and died. The mother, seeing her lacerated son, gave thanks to God that He had vouchsafed the boy a martyr’s end. After many cruel tortures they beheaded Saint Julitta with the sword.       The relics of Saints Kyrikos and Julitta were discovered during the reign of holy Equal-to-the-Apostles Constantine (+ 337, Comm. 21 May). In honour of these holy martyrs there was built near Constantinople a monastery, and not far off from Jerusalem was built a church. In popular custom, Saints Kyrikos and Julitta are prayed to for family happiness, and the restoring to health of sick children. 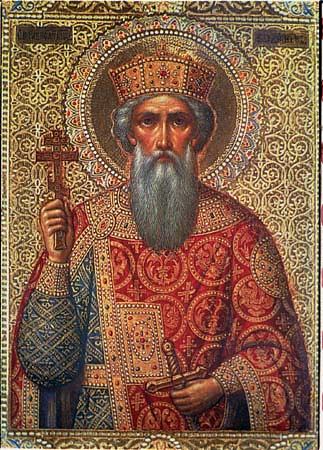 Martyr Abudimus of the isle of Tenedos (4th c.).
He was born on the island Tenedos and suffered under Diocletian.

Synaxis of All Saints of Kiev.

St. Vladimir the Great, Troparion, Tone IV
Seated on the high throne of Kiev, the mother of cities saved by God,
thou
didst emulate the merchant who sought the goodly pearl,
O Vladimir glorious in
might,
and examining and sending emissaries to the Imperial City to learn about
the Orthodox Faith,
thou didst find Christ the priceless Pearl, Who chose thee
as a second Paul
and in the holy font removed thy blindness, spiritual and
bodily.
Wherefore, we, thy people, celebrate thy repose.
Pray thou, that
Russia, thy land, be saved,
and that peace and great mercy be granted to the
Orthodox people.