1 Corinthians 10:28-11:7
But if anyone says to you, “This was offered to idols,” do not eat it for the sake of the one who told you, and for conscience’ sake; for “the earth is the LORD’s, and all its fullness.” Conscience, I say, not your own, but that of the other. For why is my liberty judged by another man’s conscience? But if I partake with thanks, why am I evil spoken of for the food over which I give thanks? Therefore, whether you eat or drink, or whatever you do, do all to the glory of God. Give no offense, either to the Jews or to the Greeks or to the church of God, just as I also please all men in all things, not seeking my own profit, but the profit of many, that they may be saved. Imitate me, just as I also imitate Christ. Now I praise you, brethren, that you remember me in all things and keep the traditions just as I delivered them to you. But I want you to know that the head of every man is Christ, the head of woman is man, and the head of Christ is God. Every man praying or prophesying, having his head covered, dishonors his head. But every woman who prays or prophesies with her head uncovered dishonors her head, for that is one and the same as if her head were shaved. For if a woman is not covered, let her also be shorn. But if it is shameful for a woman to be shorn or shaved, let her be covered. For a man indeed ought not to cover his head, since he is the image and glory of God; but woman is the glory of man.

Matthew 16:24-28
Then Jesus said to His disciples, “If anyone desires to come after Me, let him deny himself, and take up his cross, and follow Me. For whoever desires to save his life will lose it, but whoever loses his life for My sake will find it. For what profit is it to a man if he gains the whole world, and loses his own soul? Or what will a man give in exchange for his soul? For the Son of Man will come in the glory of His Father with His angels, and then He will reward each according to his works. Assuredly, I say to you, there are some standing here who shall not taste death till they see the Son of Man coming in His kingdom.

1 Corinthians 9:2-12 (Equal-to-the-Apostles)
If I am not an apostle to others, yet doubtless I am to you. For you are the seal of my apostleship in the Lord. My defense to those who examine me is this: Do we have no right to eat and drink? Do we have no right to take along a believing wife, as do also the other apostles, the brothers of the Lord, and Cephas? Or is it only Barnabas and I who have no right to refrain from working? Who ever goes to war at his own expense? Who plants a vineyard and does not eat of its fruit? Or who tends a flock and does not drink of the milk of the flock? Do I say these things as a mere man? Or does not the law say the same also? For it is written in the law of Moses, “You shall not muzzle an ox while it treads out the grain.” Is it oxen God is concerned about? Or does He say it altogether for our sakes? For our sakes, no doubt, this is written, that he who plows should plow in hope, and he who threshes in hope should be partaker of his hope. If we have sown spiritual things for you, is it a great thing if we reap your material things? If others are partakers of this right over you, are we not even more? Nevertheless we have not used this right, but endure all things lest we hinder the gospel of Christ.

Luke 8:1-3 (Equal-to-the-Apostles)
Now it came to pass, afterward, that He went through every city and village, preaching and bringing the glad tidings of the kingdom of God. And the twelve were with Him, and certain women who had been healed of evil spirits and infirmities-Mary called Magdalene, out of whom had come seven demons, and Joanna the wife of Chuza, Herod’s steward, and Susanna, and many others who provided for Him from their substance. 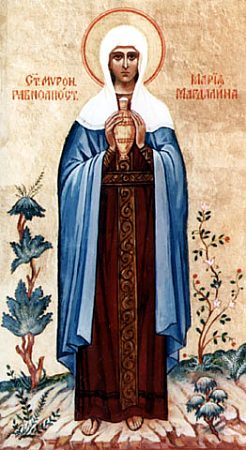 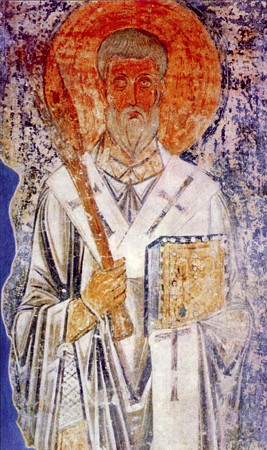 The Priestmartyr Phocas was born in the city of Sinope. From youth he led a virtuous Christian life, and in his adult years he was elevated to bishop of Sinope. Sainted Phocas converted many pagans to faith in Christ. At the time of a persecution against Christians under the emperor Trajan (98-117), the governor demanded the saint to renounce Christ. After fierce torture they closed Saint Phocas into an hot bath, where he died a martyr’s death in the year 117.       In the year 404 the relics of the saint were transferred to Constantinople (Commemoration of the Transfer of Relics is 22 July).       The Priestmartyr Phocas is especially venerated as a defender against fires, but also as giving aid to the drowning.

Venerable Cornelius , monk, of Pereyaslavl, and confessor of Alexandrov Convent (1693).
The Monk Kornilii of Pereyaslavl’, in the world Konon, was the son of a Ryazan merchant. In his youthful years he left his parental home and lived for five years as a novice of the Starets/Elder Paul in the Lukyanovsk wilderness near Pereyaslavl’. Afterwards the young ascetic transferred to the Pereyaslavl’ monastery of Saints Boris and Gleb on the Peskakh/Sands. Konon eagerly went to church and unquestioningly did everything that they commanded him. In the refectory the holy novice did not sit down with the brethren, but contented himself with what remained, accepting food thrice a week. After five years he took monastic orders with the name Kornilii. From that time no one saw the monk sleeping on a bed. Several of the brethren scoffed at Saint Kornilii as foolish, but the monk quietly endured the insults and intensified his monastic efforts. Having asked permission of the hegumen to live as an hermit, he secluded himself into his own separately constructed cell and constantly practised asceticism in fasting and prayer. One time the brethren found him barely alive: the cell of the monk was locked from within. Three months the Monk Kornilii lay ill: he could take only water and juice. The monk, having recovered and being persuaded by the hegumen, stayed to live with the brethren. Saint Kornilii was sexton in church, he served in the refectory, and toiled in the garden. Blessing the labours of the monk, in the monastery garden there grew excellent apples, which he lovingly distributed to those approaching. From strict fasting the body of the Monk Kornilii was withered up, but he did not cease to toil: with his hands he built a well for the brethren. For thirty years the Monk Kornilii lived in complete silence, being considered by the brethren as deaf and dumb. Before his death on 22 July 1693, the Monk Kornilii made confession to the monastery priest Father Varlaam, communed the Holy Mysteries and took on the schema. The monk was buried in the chapel. After 9 years during the construction of a new church his relics were opened uncorrupt. In the year 1705 Saint Dimitrii, Metropolitan of Rostov, (Comm. 28 October), witnessed to the relics of the Monk Kornilii, and they were situated in the new church in a secluded place. Then the sainted bishop composed a tropar and kondak to the monk.

Venerable Marcella of Chios (1500).
Ven. Martyr Marcella suffered for Christ on the island of Chios where her memory is especially honored by its inhabitants.

St. Cyprian, fool-for-Christ of Suzdal (1622).
Blessed Kiprian, fool-for-Christ’s-sake, was gatekeeper of the church in Voskresensk, near the city of Kovrov in Vladimir Diocese. Saint Kiprian pursued his calling in silence on an island near the mouth of the rivers Kliazma and Uvod. At his death on 22 July 1622 the body of the saint of God was buried near the church in the village of Voskresensk. In the year 1751 diligent admirers of the saint added a chapel to the church near his grave, in honour of the “Pokrov/Protection” of the Mother of God. On the iconographic original of the saint it says: “22 July the death of the holy righteous Kiprian, fool-for-Christ’s-sake in the village Voskresensk and wonderworker of Suzdal’; in appearance dark-featured, hair hung behind the ears, a beard like (Saint John) the Theologian forked, in clothes of green, legs barefooted, hands in prayer”.

Holy Myrrh-Bearer and Isapostle Mary Magdalene, Troparion, Tone I
The honorable Mary Magdalene followed after Christ,
Who for our sake was
born of the Virgin,
keeping His precepts and laws.
Wherefore, celebrating thy
most holy memory today,
through thy supplications we receive remission of
sins.

“I love Thee, O my Bridegroom,
and, seeking Thee, I pass through many
strug­gles:
I am crucified and buried with Thee in Thy baptism,
and suffer for
Thy sake, that I may reign with Thee;
I die for Thee that I might live with
Thee.
As an unblemished sacrifice accept me,
who sacrifice myself with love
for Thee
By her supplications save Thou our souls, in that Thou art merciful.

Kontakion of the Myrrh-Bearer, Tone III: “Today the Virgin…”
Standing before the Cross of the Savior with many others,
suffering with the
Mother of the Lord and pouring forth tears,
the all-glorious one made this
offering as praise, saying:
“What is this strange wonder? Is it Thy will to
suf­fer, O Thou Who sustainest all creation?
Glory to Thy dominion!”

Hieromartyr Phocas, bishop of Sinope, Troparion, in Tone IV
As thou didst share in the ways of the apostles
and didst occupy their
throne,
thou didst find thine activity to be a passage to divine vision,
O
divinely inspired one.
Where­fore, ordering the word of truth,
thou didst
suffer for the Faith even to the shedding of thy blood.
O hieromartyr Phocas,
entreat Christ God, that our souls be saved.