2 Corinthians 5:10-15 (Monday)
For we must all appear before the judgment seat of Christ, that each one may receive the things done in the body, according to what he has done, whether good or bad. Knowing, therefore, the terror of the Lord, we persuade men; but we are well known to God, and I also trust are well known in your consciences. For we do not commend ourselves again to you, but give you opportunity to boast on our behalf, that you may have an answer for those who boast in appearance and not in heart. For if we are beside ourselves, it is for God; or if we are of sound mind, it is for you. For the love of Christ compels us, because we judge thus: that if One died for all, then all died; and He died for all, that those who live should live no longer for themselves, but for Him who died for them and rose again.

Mark 1:9-15 (Monday)
It came to pass in those days that Jesus came from Nazareth of Galilee, and was baptized by John in the Jordan. And immediately, coming up from the water, He saw the heavens parting and the Spirit descending upon Him like a dove. Then a voice came from heaven, “You are My beloved Son, in whom I am well pleased.” Immediately the Spirit drove Him into the wilderness. And He was there in the wilderness forty days, tempted by Satan, and was with the wild beasts; and the angels ministered to Him. Now after John was put in prison, Jesus came to Galilee, preaching the gospel of the kingdom of God, and saying, “The time is fulfilled, and the kingdom of God is at hand. Repent, and believe in the gospel.”

Colossians 1:12-18 (Image)
giving thanks to the Father who has qualified us to be partakers of the inheritance of the saints in the light. He has delivered us from the power of darkness and conveyed us into the kingdom of the Son of His love, in whom we have redemption through His blood, the forgiveness of sins. He is the image of the invisible God, the firstborn over all creation. For by Him all things were created that are in heaven and that are on earth, visible and invisible, whether thrones or dominions or principalities or powers. All things were created through Him and for Him. And He is before all things, and in Him all things consist. And He is the head of the body, the church, who is the beginning, the firstborn from the dead, that in all things He may have the preeminence.

Luke 9:51-56; 10:22-24 (Image)
Now it came to pass, when the time had come for Him to be received up, that He steadfastly set His face to go to Jerusalem, and sent messengers before His face. And as they went, they entered a village of the Samaritans, to prepare for Him. But they did not receive Him, because His face was set for the journey to Jerusalem. And when His disciples James and John saw this, they said, “Lord, do You want us to command fire to come down from heaven and consume them, just as Elijah did?” But He turned and rebuked them, and said, “You do not know what manner of spirit you are of. For the Son of Man did not come to destroy men’s lives but to save them. And they went to another village. All things have been delivered to Me by My Father, and no one knows who the Son is except the Father, and who the Father is except the Son, and the one to whom the Son wills to reveal Him. Then He turned to His disciples and said privately, “Blessed are the eyes which see the things you see; for I tell you that many prophets and kings have desired to see what you see, and have not seen it, and to hear what you hear, and have not heard it.

Martyr Diomedes the Physician of Tarsus in Cilicia (298). 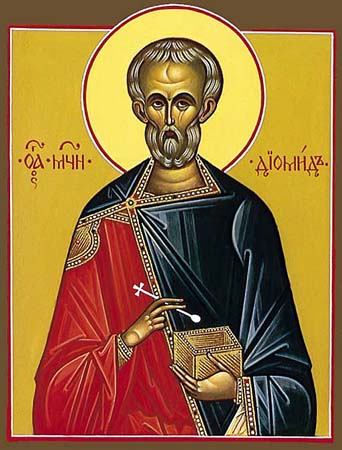 The Martyr Diomedes was born in Cilician Tarsus, and by profession he was a physician, but by belief a Christian, and he treated not only ills not only of body but also of soul. He enlightened many pagans with belief in Christ, and baptised them. The Church venerates him as an healer and summons his name during the making of the Sacrament of Oil-Anointing the Sick.       Saint Diomedes traveled much, converting people to the true faith. When he arrived in the city of Nicea, the emperor Diocletian (284-305) sent soldiers to arrest him. Along the way from Nicea to Nicomedia, he got down from the cart so as to pray, and he died. As proof of carrying out their orders, the soldiers cut off his head, but became blinded. Diocletian gave orders to take away the head back to the body. When the soldiers fulfilled the order, their sight was restored and they believed in Christ. 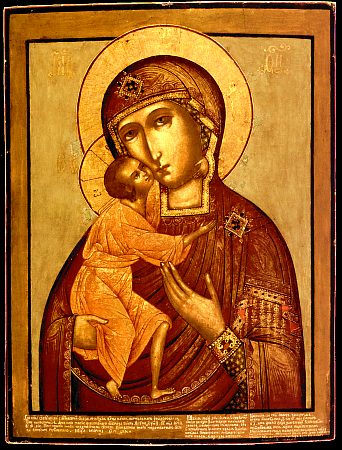 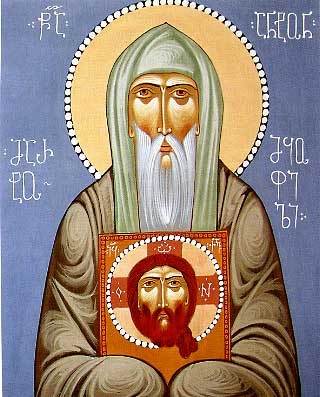 The Monk Anthony, Pillar-Dweller of Martkops, – one of the thirteen Cappadocian holy fathers, the founders of Gruzian / Georgian monasticism (the account about them is located under 7 May), arrived in Gruzia in the VI Century. According to tradition, he brought to Gruzia the first copy on “tile” from the Edessa original of the Saviour Image Not-made-by-hand. He settled on a solitary mountain, called in his honour Martkops – which means “solitary”, and there founded a monastery and constructed a church in honour of the Saviour Image Not-made-by-hand. For the last 15 years of his life the monk Anthony pursued asceticism upon a pillar, wherefore he received the name Pillar-Dweller of the Iversk Church. (This pillar, destroyed by time, was still preserved in the last century, and the monastery founded by the Monk Anthony existed until the middle of the XVIII Century).       At the end of his earthly life, the Monk Anthony was buried in the church built by him; at his tomb there thronged a crowd of believers, and miracles of healing occurred. His memory is celebrated by the Georgian-Gruzian Church on 19 January, and on the day of 16 August is the temple feast of the Anchiskhat Church in Tbilisi, wherein is preserved the wonderworking icon of Saviour Image Not-made-by-hand, brought by the monk. 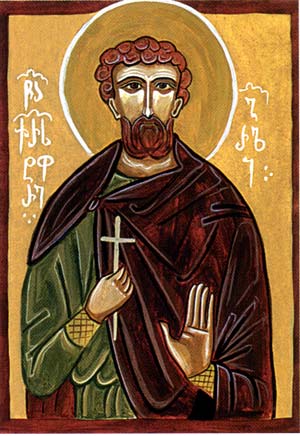 The Martyr It is commonly believed that St. Christopher Guruli was martyred, but little information exists about him to prove this. Christophers name has been preserved in the nations memory, and he is commemorated in the Church calendar.       The Georgian ancestry of Holy Martyr Christopher is indicated by his appellation, Guruli, which means from the province of Guria (in western Georgia). From this, Church historians have been led to believe that Holy Martyr Christopher labored in Georgia.

Venerable Cherimon (Chaeremon) of Egypt (4th c.).
The Monk Cherimon asceticised in Egypt in the Skete wilderness-monastery, either at the end of the IV Century or the beginning years of the V Century. His name is remembered in the “Lausiaca” of Palladios and in the alphabetic Paterikon. His cave stood at a distance of 40 stadia from church and 12 stadia from a spring of water. The saint died at handicraft at more than 100 years of age. The Monk Cherimon is remembered likewise by the Monk Theodore the Studite (+ 11 November 826) within the Lenten Triodion – in the Service for Cheesefare Saturday, in the 6th Ode of the Matins canon.

Venerable Joachim, monk, of Osogovo and Sarandapor (11th c.).
The Monk Joakim of Osogovsk was one of four great hermits of Bulgaria, having inspired by his ascetic efforts hundreds and thousands of people to Christian asceticism. He lived in the XI Century, unknown by anyone, in a cave on the Osogovsk heights. Just before his death he chanced to encounter two hunters, whom he blessed for a successful hunt. The demise of the monk followed, as he revealed in a posthumous vision, “during a great darkness (i.e. an eclipse) eight years previous”, i.e. approximately in the year 1115. A monastery was afterwards built on the place of his ascetic deeds.

New Martyr Stamatius of Volos, Thessaly (1680) (Greek).
The Martyr Stamatios was a native of the city of Boleia (Thessaly). They slandered him as having accepted Islam, but he bravely confessed himself a Christian and was beheaded by the sword at Constantinople in 1680.

Venerable Nilus, brother of Emperor Theodore Laskaris, who rebuilt the monastery of the Mother of God at Epirus (Greek).

St. Timothy of Chalcedon, archbishop, founder of the monastery of Pendeli (Greek).

Translation of the relics of Martyrs Seraphim, Dorotheus, James, Demetrius, Basil and Sarantis of Megaris (Greek).

Troparion of the Holy Icon Not Made with Hands, Troparion, in Tone II
We bow down before Thine all-pure image, O Good One,
asking forgiveness of
our transgressions, O Christ God;
for Thou wast well pleased to ascend the
Cross in the flesh of Thine own will,
that Thou mightest save what Thou hadst
created from slavery to the enemy.
Wherefore, we cry out to Thee in
thanksgiving:
Thou hast filled all things with joy, O our Savior, Who hast
come to save the world.