Matthew 13:24-30, 36-43 (Matins Gospel)
Another parable He put forth to them, saying: “The kingdom of heaven is like a man who sowed good seed in his field; but while men slept, his enemy came and sowed tares among the wheat and went his way. But when the grain had sprouted and produced a crop, then the tares also appeared. So the servants of the owner came and said to him, ‘Sir, did you not sow good seed in your field? How then does it have tares?’ He said to them, ‘An enemy has done this.’ The servants said to him, ‘Do you want us then to go and gather them up?’ But he said, ‘No, lest while you gather up the tares you also uproot the wheat with them. ‘Let both grow together until the harvest, and at the time of harvest I will say to the reapers, “First gather together the tares and bind them in bundles to burn them, but gather the wheat into my barn.” ‘ ” Then Jesus sent the multitude away and went into the house. And His disciples came to Him, saying, “Explain to us the parable of the tares of the field.” He answered and said to them: “He who sows the good seed is the Son of Man. The field is the world, the good seeds are the sons of the kingdom, but the tares are the sons of the wicked one. The enemy who sowed them is the devil, the harvest is the end of the age, and the reapers are the angels. Therefore as the tares are gathered and burned in the fire, so it will be at the end of this age. The Son of Man will send out His angels, and they will gather out of His kingdom all things that offend, and those who practice lawlessness, and will cast them into the furnace of fire. There will be wailing and gnashing of teeth. Then the righteous will shine forth as the sun in the kingdom of their Father. He who has ears to hear, let him hear!

Hebrews 2:2-10 (Epistle, Angels)
For if the word spoken through angels proved steadfast, and every transgression and disobedience received a just reward, how shall we escape if we neglect so great a salvation, which at the first began to be spoken by the Lord, and was confirmed to us by those who heard Him, God also bearing witness both with signs and wonders, with various miracles, and gifts of the Holy Spirit, according to His own will? For He has not put the world to come, of which we speak, in subjection to angels. But one testified in a certain place, saying:”What is man that You are mindful of him, Or the son of man that You take care of him? You have made him a little lower than the angels; You have crowned him with glory and honor, And set him over the works of Your hands. You have put all things in subjection under his feet.” For in that He put all in subjection under him, He left nothing that is not put under him. But now we do not yet see all things put under him. But we see Jesus, who was made a little lower than the angels, for the suffering of death crowned with glory and honor, that He, by the grace of God, might taste death for everyone. For it was fitting for Him, for whom are all things and by whom are all things, in bringing many sons to glory, to make the captain of their salvation perfect through sufferings.

Luke 10:16-21 (Gospel, Angels)
He who hears you hears Me, he who rejects you rejects Me, and he who rejects Me rejects Him who sent Me. Then the seventy returned with joy, saying, “Lord, even the demons are subject to us in Your name.” And He said to them, “I saw Satan fall like lightning from heaven. Behold, I give you the authority to trample on serpents and scorpions, and over all the power of the enemy, and nothing shall by any means hurt you. Nevertheless do not rejoice in this, that the spirits are subject to you, but rather rejoice because your names are written in heaven. In that hour Jesus rejoiced in the Spirit and said, “I thank You, Father, Lord of heaven and earth, that You have hidden these things from the wise and prudent and revealed them to babes. Even so, Father, for so it seemed good in Your sight.

Synaxis of the Archangel Michael and the other Bodiless Powers: the Archangels Gabriel , Raphael, Uriel, Salaphiel, Jegudiel, Barachiel, and Jeremiel. 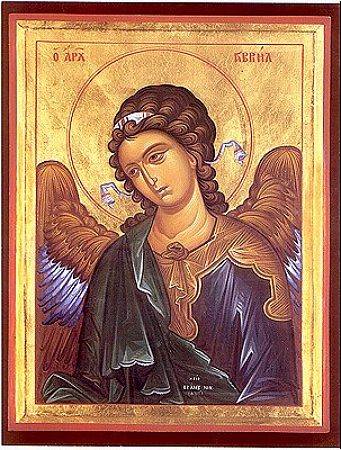 Each of the Great Feasts of the Church is followed by a commemoration of some holy one who figures in the events of the Feast. So, today we commemorate the Holy Archangel Gabriel, who brought the glad news of the conception of Christ to Mary, the Theotokos. The Prologue gives the following teaching:   “The herald of the incarnation of the Son of God, he is one of the seven great angels who stand before the throne of God. He revealed to Zacharias the birth of the Forerunner, and said of himself: ‘I am Gabriel that stand in the presence of God’ (Lk. 1:19). His name, Gabriel, signifies ‘man of God’. Speaking about the Annunciation, the holy Fathers comment that an angel with such a name was sent to signify who He was,and of what nature He was, who would be born of the most pure Virgin. He would be the Man of God, the Man-God, the strong and mighty God. Others have found that it was this same Gabriel who announced the conception of the Virgin Mary to Joachim and Anna, and that it was he who taught Moses in the wilderness to write the Book of Genesis. The holy Fathers consider that Gabriel belongs to the foremost and highest order of the heavenly powers, the seraphim, since the seraphim stand closest to God. And so he is one of the seven seraphim closest to God. The names of these seven are: Michael, Gabriel, Raphael, Uriel, Selathiel, Jegudiel and Barachiel. Some would add Jeremiel to this number. Each has his own particular service, but all are equal in honour. Why did God not send Michael? For the reason that Michael’s service is the suppression of the enemies of God’s truth, while Gabriel’s is the annunciation of the salvation of the human race.”

Righteous Martha, princess of Pskov (1300).
Venerable Tyssilio, abbot of Meifod (Powys) (7th c.) (Celtic & British).
St. Willihad, bishop of Bremen (Germany).
New Martyr Michael the Blessed of Chernigov (1922).
Martha of Pskov, the wife of St. Dovmont (Timothy), Prince of Pskov (May 20), was tonsured a nun in the Pskov Forerunner Monastery. She died in 1300.

Synaxis of the Archangel Michael, Commander of the Heavenly Host,
Troparion, Tone IV
Supreme commanders of the armies of Heaven,
we, the unworthy, do ever
entreat you,
that by your prayers ye ever surround us
with the protection of
the wings of your immaterial glory,
preserving us that earnestly fall down
before you and cry aloud:
Deliver us from misfortunes,
in that ye are the
leaders of the hosts on high.

Kontakion, in Tone II
O ye chief commanders of God,
ministers of glory divine, captains of the
angels and instructors of men:
beg ye great mercy and that which is profitable
for us,
for ye are the supreme commanders of the bodiless hosts.

Another Troparion, Tone IV
O Commanders of the heavenly hosts,
We who are unworthy beseech you:
By
your prayers encompass us
Beneath the wings of your immaterial glory,
And
faithfully preserve us who fall down and cry out to you:
Deliver us from all
harm, For you are the commanders of the powers on high!