1 Thessalonians 5:1-8 (Thursday)
But concerning the times and the seasons, brethren, you have no need that I should write to you. For you yourselves know perfectly that the day of the Lord so comes as a thief in the night. For when they say, “Peace and safety!” then sudden destruction comes upon them, as labor pains upon a pregnant woman. And they shall not escape. But you, brethren, are not in darkness, so that this Day should overtake you as a thief. You are all sons of light and sons of the day. We are not of the night nor of darkness. Therefore let us not sleep, as others do, but let us watch and be sober. For those who sleep, sleep at night, and those who get drunk are drunk at night. But let us who are of the day be sober, putting on the breastplate of faith and love, and as a helmet the hope of salvation.

The Holy GreatMartyr Menas, an Egyptian by birth, was a soldier and served in the city Kotuan under the centurion Firmilian during the reign of the emperors Diocletian and Maximian (284-305). When the co-emperors began the then fiercest persecution against Christians in history, the saint lost all desire to serve these persecutors and, having left the service, he withdrew to a mountain, where he asceticised in fasting and prayer. Once during the time of a pagan feastday he happened to arrive in the city, in which earlier he had served. At the climax of the festal games, which all the city had come out to see, rang out the accusing voice of the saint of God, preaching faith in Christ, the Saviour of the world.       At trial before the governor Pyrrhos the saint bravely confessed his faith and said, that he had come hither, in order to denounce all of impiety. Saint Menas spurned he suggestion to offer sacrifice to the pagan gods, and he was put to cruel tortures, after which he as beheaded. This occurred in the year 304. The body of the holy martyr as ordered to be burnt. Christians by night gathered up from the burnt-out fire the undestroyed remains of the martyr, which later were installed in a church in his name, built after the cessation of the persecution at the place of the suffering and death of the GreatMartyr Menas.

The Holy Martyr Victor was a soldier during the reign of the emperor Marcus Auelius the Philosopher (161-180). When the emperor began a persecution against Christians, Victor refused to offer sacrifice to the pagan gods. Such obligatory sacrifices were made as a test of the loyalty of a soldier to the gods, the emperor and the state. The saint was given over to torture, but he came through all the torments unharmed. By the power of prayer he was victorious over a sorcerer, who from that point in time gave up give sorcery and became a Christian. Through the prayer of the saint, blind soldiers were suddenly restored their sight. Beholding the miracle, manifest by the Lord through Saint Victor, a young pious spouse of one of the torturers, Stephanida, openly glorified Christ, for which she was condemned to cruel execution: they tied her to two bended-over palm trees, which in springing back straight tore apart the martyress. The holy Martyr Victor was beheaded. The martyrs suffered in the II Century at Damascus, where also heir venerable remains were consigned to burial.

Born in Spain, he was a deacon in the city of Augustopolis. During the persecution of Christian under Diocletian he was given over for crucifixion in the city of Valencia. Miraculously saved from death on the cross, St. Vincent then was burnt on an iron grid. His relics today repose in Rome.

Venerable Theodore the Confessor, abbot of the Studion (826). 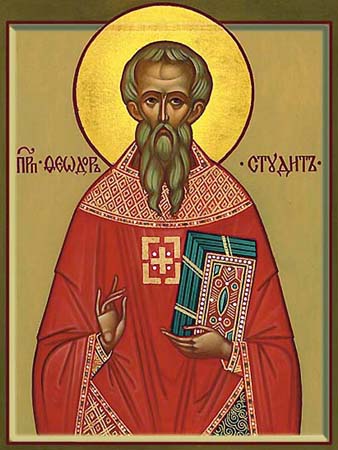 Blessed Maxim, Fool-for-Christ, lived at Moscow. About his parentage, time and place of birth, nothing is known. Saint Maxim chose one of the most difficult and thorny paths to salvation, voluntarily for the sake of Christ having taken upon himself the guise of a fool. Summer and winter Maxim walked about almost naked, bearing with prayer both the heat and cold. He had a saying: “Fierce though be the winter, yet sweet be paradise”. Rus’ very much loved its holy fools, it esteemed their deep humility, it heeded their wisdom, expressed profitably and aphoristically in the proverbial sayings of the people’s language. And everyone heeded the holy fools: everyone from the great princes on down to the least beggar.       Blessed Maxim lived at a difficult time for the Russian people. Tatar incursions, droughts, epidemics were endemic and people perished. The saint said to the unfortunate: “Not everything is by the weave of the wool, some be opposite… They have won the fight, admit it, and bow the lower; weep not for the beaten, weep rather the unbeaten; let us show tolerance and in this we shalt at least be human; gradually even raw firewood ignites; for toleration may God grant salvation”. But the saint did not only speak words of consolation. His angry denunciations frightened the mighty of his world. Blessed Maxim was wont to say to the rich and illustrious: “An idolatrous house, and a conscience corrupted; everyone is baptised, let everyone pray; God doth detect every wrong. He deceiveth not thee, nor deceivest thou He”.       Blessed Maxim died on 11 November 1434 and as buried at the church of the holy Princes Boris and Gleb. Miraculous healings began occurring from the relics of the saint of God. In a circular missive of 1547, metropolitan Makarii enjoined “the singing and celebration at Moscow to the new Wonderworker Maxim, Fool-for-Christ”. That same year on 13 August the relics of Blessed Maxim were uncovered undecayed. The church of Saints Boris and Gleb, at which the saint was buried, burned in the year 1568. On its place was built a new church, which they consecrated in the name of Saint Maxim, Fool-for-Christ. And into this church was put the venerable relics of Saint Maxim. 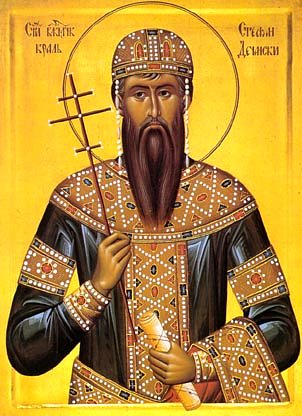 He became famous by his piety, love for building temples to God (he constructed the Dechani monastery) and compassion for the poor. Having led most of his life under the oppression of various disasters, Saint Stephen died a martyr. He was strangled by agents of his own son in Zvelane 1336. His relics are in the Dechani Monastery.

St. Martin the Merciful, bishop of Tours (397).
This holy and beloved Western Saint, the patron of France, was born in Pannonia (modern-day Hungary) in 316, to a pagan military family stationed there. Soon the family returned home to Italy, where Martin grew up. He began to go to church at the age of ten, and became a catechumen. Though he desired to become a monk, he first entered the army in obedience to his parents.   One day, when he was stationed in Amiens in Gaul, he met a poor man shivering for lack of clothing. He had already given all his money as alms, so he drew his sword, cut his soldier’s cloak in half, and gave half of it to the poor man. That night Christ appeared to him, clothed in the half-cloak he had given away, and said to His angels, “Martin, though still a catechumen, has clothed me in this garment.” Martin was baptised soon afterward. Though he still desired to become a monk, he did not obtain his discharge from the army until many years later, in 356.   He soon became a disciple of St Hilary of Poitiers (commemorated January 13), the “Athanasius of the West.” After traveling in Pannonia and Italy (where he converted his mother to faith in Christ), he returned to Gaul, where the Arian heretics were gaining much ground. Not long afterward became Bishop of Tours, where he shone as a shepherd of the Church: bringing pagans to the faith, healing the sick, establishing monastic life throughout Gaul, and battling the Arian heresy so widespread throughout the West. Finding the episcopal residence too grand, he lived in a rude, isolated wooden hut, even while fulfilling all the duties of a Bishop of the Church.   His severity against heresy was always accompanied by love and kindness toward all: he once traveled to plead with the Emperor Maximus to preserve the lives of some Priscillianist heretics whom the Emperor meant to execute.   As the holy Bishop lay dying in 397, the devil appeared to tempt him one last time. The Saint said, “You will find nothing in me that belongs to you. Abraham’s bosom is about to receive me.” With these words he gave up his soul to God.   He is the first confessor who was not a martyr to be named a Saint in the West. His biographer, Sulpitius Severus, wrote of him: “Martin never let an hour or a moment go by without giving himself to prayer or to reading and, even as he read or was otherwise occupied, he never ceased from prayer to God. He was never seen out of temper or disturbed, distressed or laughing. Always one and the same, his face invariably shining with heavenly joy, he seemed to have surpassed human nature. In his mouth was nothing but the Name of Christ and in his soul nothing but love, peace and mercy.”

Appearance of the Myrrh-Streaming Icon of the Iveron Mother of God in Montreal.

St. Nicodemus the Younger of Beroea in Macedonia (1305).

Synaxis of the Saints of Dechani.

Martyrs Minas, Victor & Vincent; Martyr Stephanida, Troparion, Tone IV
In their sufferings, O Lord,
Thy martyrs received imperishable crowns from
Thee our God;
for, possessed of Thy might,
they set at nought the tormentors
and crushed the feeble audacity of the demons.
By their supplications save
Thou our souls.

Venerable Father Theodore the Studite, the Confessor, Troparion, Tone VIII
O instructor of Orthodoxy, teacher of piety and purity,
beacon for the whole
world, divinely inspired adornment of monastics.
O most wise Theodore by
thy doctrines thou hast illumined all.
O harp of the Spirit, entreat Christ
God that our souls be saved.

Kontakion to the venerable one, Tone II “Seeking the highest”
Thine angelic life of fasting
thou didst adorn with the struggles of
suffering,
O divinely blessed Theodore,
and thou hast been shown to abide with
the angels.
With them cease thou never to pray to Christ God for us all.